Adam Douglas Driver was first recognized from the HBO’s Girls (2012 – 2017). He played Hannah Horvath’s erratic-but-earnest love interest. He ended up not winning her heart in the movie but in real life, won the affection of the female millennial population, critics and directors alike. His brilliant role on the series served as one of the stepping stones to his role on the famous megahit film franchise Star Wars.

Where he is now is a far cry from Mishawaka High School back in the day at the turn of the millennium when Adam was just another school kid trying to figure out what to do with his life. He described himself as a high school “misfit”; he got lousy grades, was grounded a lot and used to spend his time “lurking around railroad tracks and setting things on fire”. One thing that can be recalled from his school days was that he was among the school’s most talented kids who could also entertain people.

After he graduated in 2001, things went nowhere fast so he took on several odd jobs just to earn a living. He fund time for some auditions but was rejected until the September 11 attack on the world trade centre gave him another perspective to life. He enlisted with the military and on his return, decided to get serious with acting. On screen, he is an incredible phenomenon but he is actually a notoriously private human. Keep reading as we take you through the personal life of this Californian star.

Nancy is a paralegal who despite not in total agreement with her son’s movie roles, is in great support of his work ethic. She raised Driver with certain Midwestern Bible school values in a church where he also sand in the choir. She’s thankful anyways that her son is doing well for himself.

He is the biological father to Adam and his sister but was quickly out of the picture as his kids were raised by his wife and her new husband after they split when Adam was seven. So far, both father and son have struggled in their relationship with each other.

Nancy married Baptist preacher Rodney after her first marriage ended and he became the father figure to Adam and his sister April. Till date, Adam prefers not to talk about his parents as he feels they have different views of the world. The This is Where I leave You (2014) actor endured a factitious relationship with the deeply religious Wright and was even tagged the rebel in their home.

In 2013, Driver married his long time lover and Julliard classmate. Tucker is also an occasional actress and the artistic director for the Arts Organisation founded by her husband in the Armed Forces Charity. The aim of the non-profit is to connect servicemen and women with powerful contemporary drama. 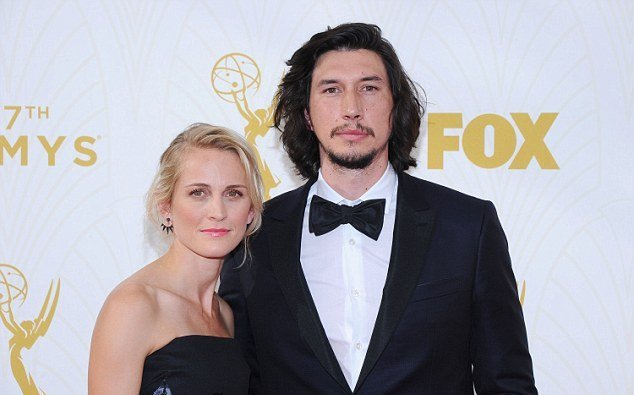 They have been married for over five years now and some sources say that they became a parents to a son but the couple didn’t confirm this info.

They are definitely parents to a Rottweiler-pit bull named Moose that Tucker got for the family.