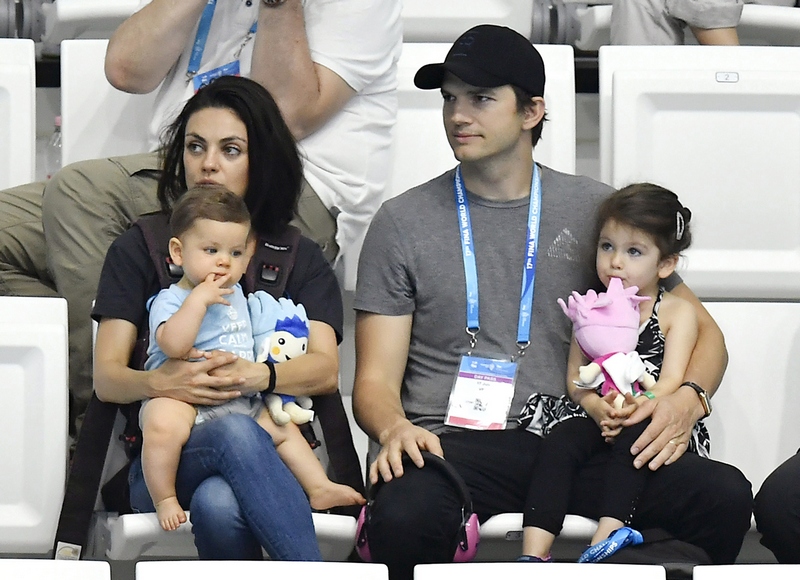 Christopher Ashton Kutcher is a versatile personality that has managed to carve out a successful career in the American film industry. He was raised in a conservative Catholic family that barely had enough to live on. Kutcher caught the acting bug when he started appearing in his high school plays but shortly after became a childhood delinquent until an arrest straightened him out.

He worked as a college summer hire so he could pay for his tuition and other times sold his blood. Fame started shining on him while at the University of Iowa when he was approached by a model scout at a bar to enter a modelling competition. The handsome internet entrepreneur placed first; dropped out of college and soon relocated to Los Angeles for a career in acting.

There are quite a number of Hollywood celebrities who manage to fiercely guard their private lives especially their kids and Ashton and his baby mama Mila Kunis are one of such. They are rarely photographed with their children but they gush on social media every now and then about how adorable the two baby Kutchers are. Keep reading to know all we could find about the down-to-earth actor.

Who are Ashton Kutcher’s parents?

Larry worked as a factory worker at General Mills while his family was still growing. When Ashton was 16, his parents divorced and went their separate ways. They both remarried and luckily for the Kutcher kids, the new step parents were as lovely as their biological parents. The Butterfly Effects (2004) actor states that he and his siblings are on good terms with all four parents and it’s been such an exciting experience. 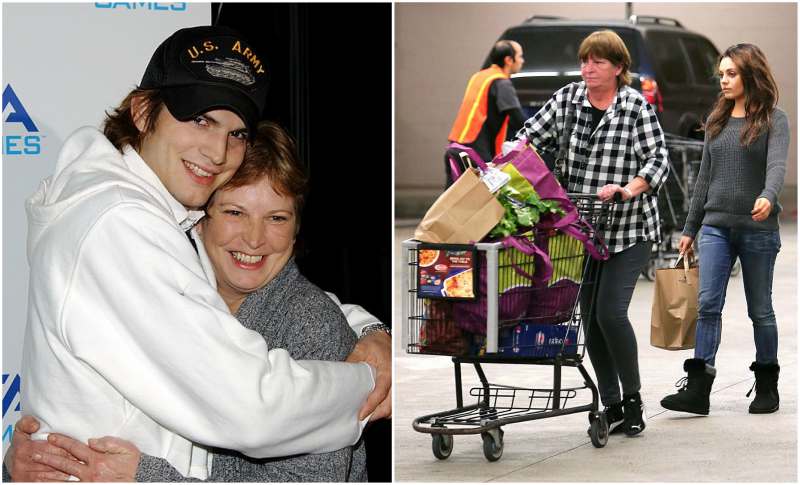 Ashton considers himself lucky to have a mother like Diane. He sees her as the greatest influence in his life and he’s not afraid to show how much of a mama’s boy he is. In 2015, the fine actor renovated his childhood home, giving it a more contemporary rustic feel as a surprise for his mom in honor of Mother’s Day. The surprise makeover was according to Ashton a lifelong dream he always wanted to do to thank his parents for being so wonderful.

After she divorced Larry, the former Procter and Gamble employee met and married another man called Mark Portwood. Being the first son, he was mistrustful when Mark came in but he stepped in and was there for the Kutcher kids in so many ways. The No Strings Attached (2011) star considers himself blessed to have two fathers and is grateful for the bond he shares with his step dad. He goes on to mention that the bond exists majorly because Portwood loves Finnegan as much as Ashton does. 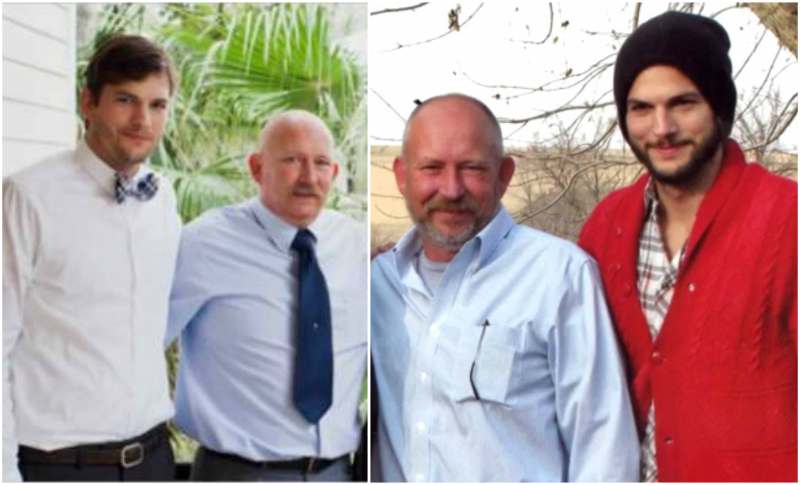 Who are Ashton Kutcher’s siblings? 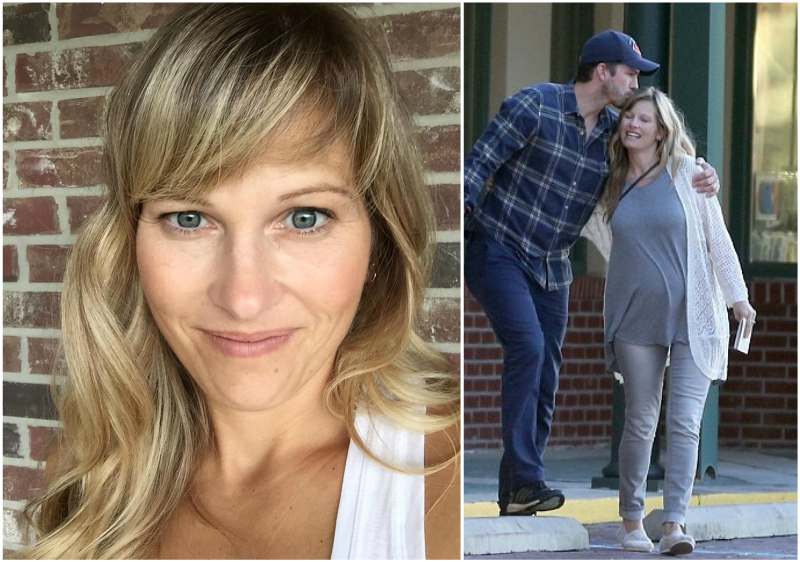 She is the only sister to the Kutcher family and is living a pretty good life off the tabloids. Tausha starred as a zombie in the season six finale of the horror series The Walking Dead (2010 – present). She got married on April 16, 2014 to production assistant Kenny Kordisch and they are both parents to a daughter named Dakota. Tausha also has an older daughter Max. 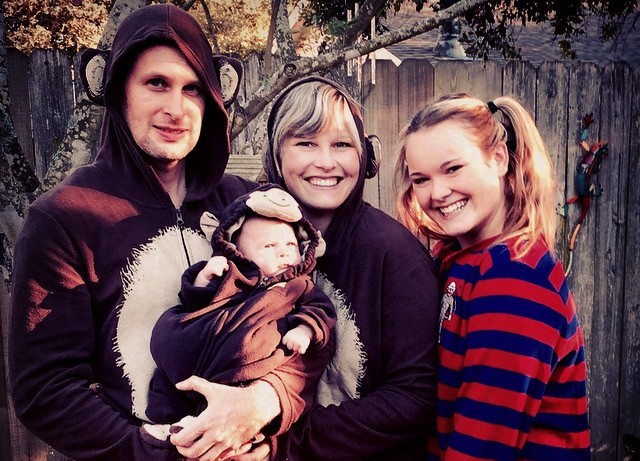 Tausha with husband and daughters 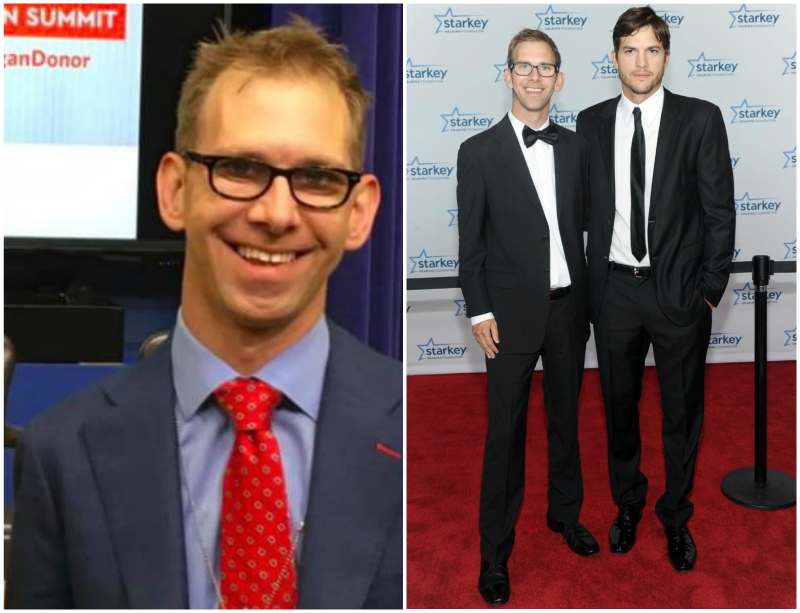 Michael is the un-identical twin brother to the Jobs (2013) actor. He was born with cerebral palsy and a heart condition called cardiomyopathy that traumatized the famous Kutcher emotionally through his childhood until an eventual heart transplant. Ashton said through his brother’s ailment, he learnt that loving people was not a choice and that though humans have unequal capabilities; we all share an equal ability to love. He was so concerned about Michael that he started out as a major in biochemical engineering so he could find a cure for his twin brother’s condition but left college before completing his degree.  The other male Kutcher is today a spokesperson for the organization called Reaching For the Stars.

Who is Ashton Kutcher’s wife? 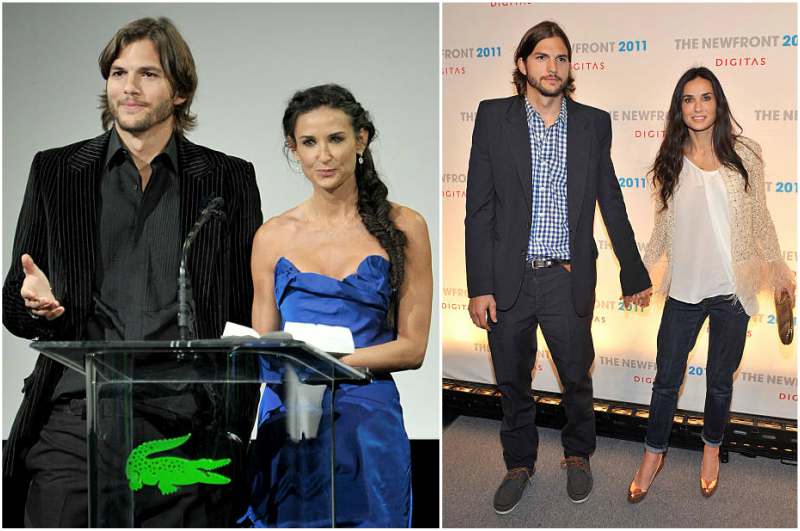 She is a former songwriter, model and actress. Her first marriage was to singer Freddy Moore and the second was to fellow actor Bruce Willis. After a few other relationships, the 16-year older Moore began dating Kutcher. The Ghost (1990) actress and Ashton split after nearly six years of marriage in 2011 and finally divorced two years later.

In Details: Demi Moore and her family

After the divorce, Kutcher admitted that he now understood his parents’ separation better as he had gone through it himself. His split according to him was painful but it made him a better man. 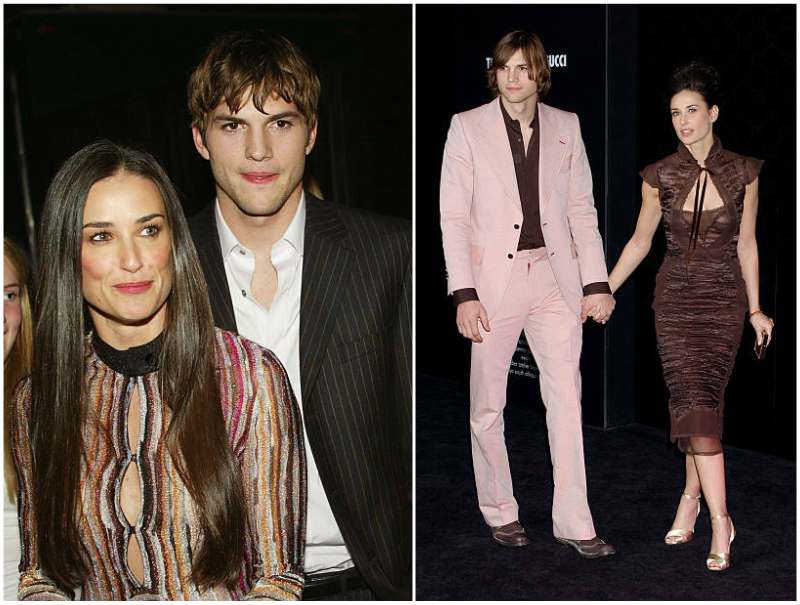 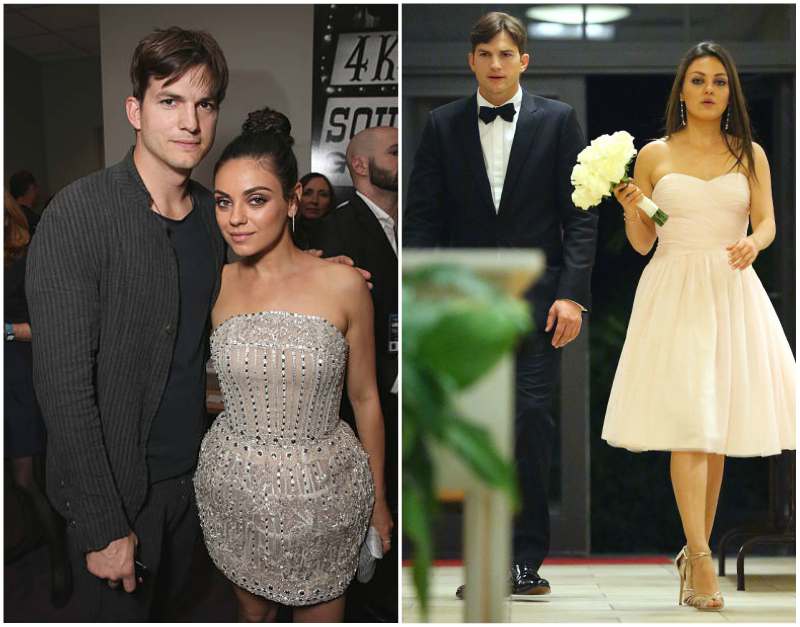 Duration of Marriage: July 2015 till present

Kunis enrolled in acting classes shortly after she relocated with her family from Ukraine to Los Angeles.  She was a cast in Forgetting Sarah Marshall (2008) which eventually became her breakout role. Mila was first in a public relationship with fellow actor Macaulay Culkin for about eight years until an amicable split in 2011. The Black Swan (2010) star stated then that marriage was not so important to her so she was content with being a long-time partner.

She met Ashton on the That ‘70s Show (1998 – 2006) but did not start dating till April 2012. Apparently, her orientation about tying the knot changed, she had their first child and the year after, they became married couple. 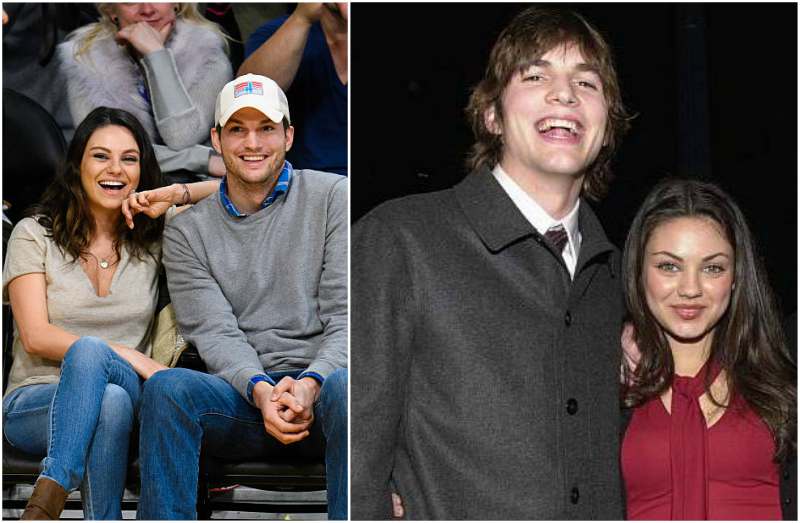 When asked how marriage and motherhood changed her, the Bad Moms (2016) actress answered; ‘I was always travelling the world and working non-stop then all of a sudden I had a husband and a child and I found myself always wanting to be back home with my family’. She has obviously become more selfless since she became a mother.

Who are Ashton Kutcher’s children? 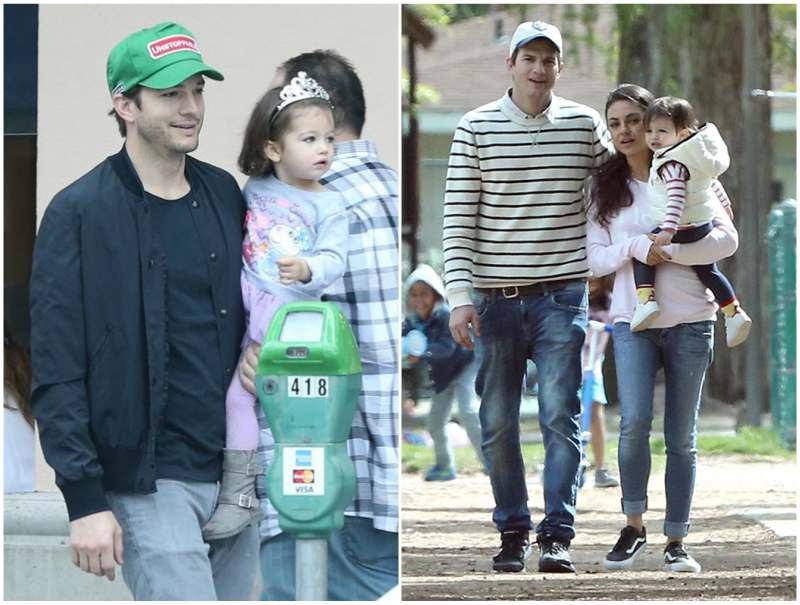 Shortly after Wyatt’s birth, the private parents trolled everyone by posting a collage of several babies and some animals without saying which baby was Wyatt. The former That ‘70s Show actors became so obsessed with being parents that they opted out of most work opportunities so they could spend time with their lovely addition. The lovebirds chose not to hire a nanny so they could be there full-time for their lovely princess. 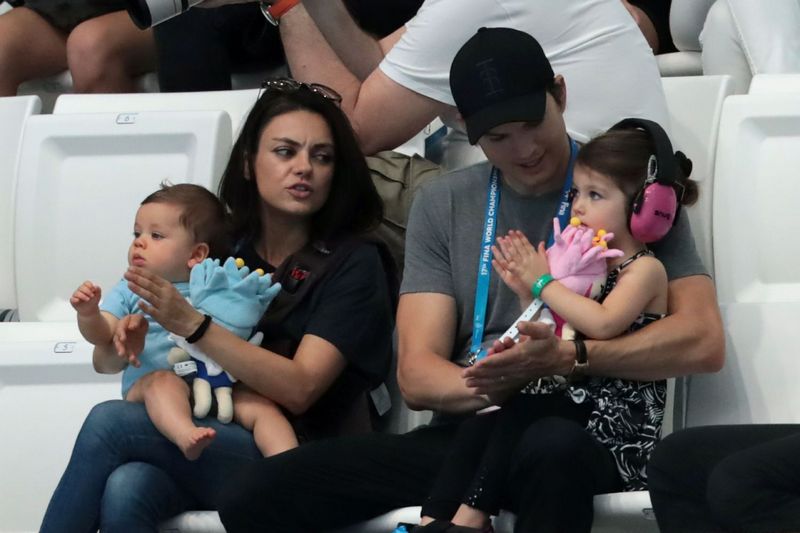 The first Kutcher son was named Dimitri going way back to his mother’s Russian roots. Kunis and her hunky husband have mentioned since the birth of Portwood that they have chosen to remain private with their kids so they choose when they are older whether they want their life in the public eye or not. As regards a new addition, the hands-on Mila states they are on two rights now and she has a perfect family with two healthy kids so why try to test her luck.