Meet the family of the entertainer extraordinaire Cher 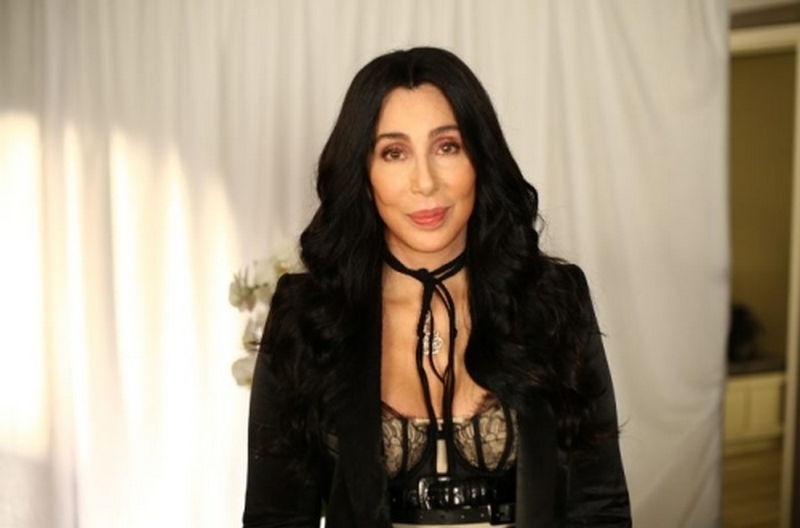 Meet the family of the entertainer extraordinaire Cher

Cherilyn Sarkisian rose to stardom as part of the singing act with her then husband Sonny Bono but she has since the 1960s amassed international fame with an array of solo top hits and screen roles, wining the famed Oscar Award for two of her movie roles. She is an exceptional singer who is equally talented in acting. Oftentimes, she is referred to as the Goddess of pop, having sung some of the best selling songs of all time since she first rose to fame in the 1960s.

She is one of those entertainers who knew from a very young age that they belonged to the world of performing arts. The Believe singer says she knew really early that the world of entertainment spoke to her so she took up acting as part of her extracurricular activities, little did she know that this was her taking baby steps towards becoming the entertainment icon she is today. Over the years, she has managed to keep rising like a phoenix from the ashes and each time she was down and counted out, she re-invents herself and finds that she is somehow back on the top again.

Show business has always been what she is mostly known for but there is another side to Cher most people hardly mention. She is one of the world’s most famous women but she put her heart into raising her kids. In her own words, she really likes being a mother as she has children that are the absolute best in the world. Enjoy the read as we bring you juicy details about the life f every one she once called or still calls family. 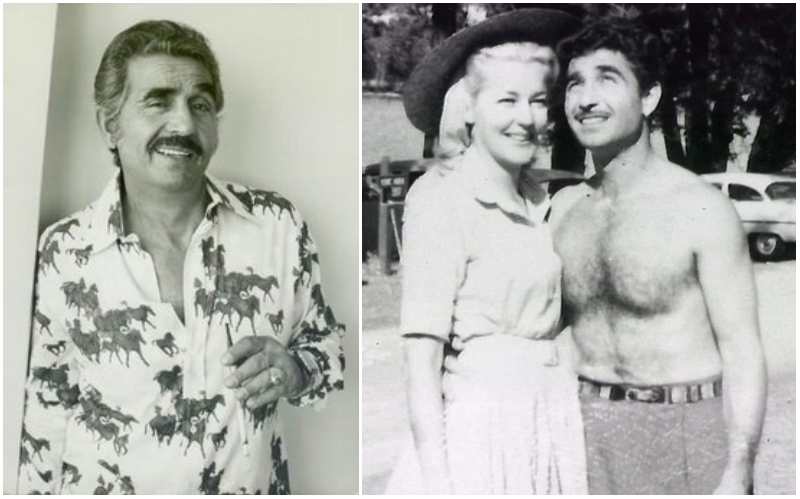 The If I Could Turn Back Time hit singer was born to the beautiful Georgia and truck driver John who was known to have drug and gambling problems, he had even spent some time in prison. He was not in the picture for long as after the divorce between himself and Holt, Cherilyn went on to live with her mother who in later years re-married. It was not until Cher clocked 11 that she finally met with her birth father Sarkisian. 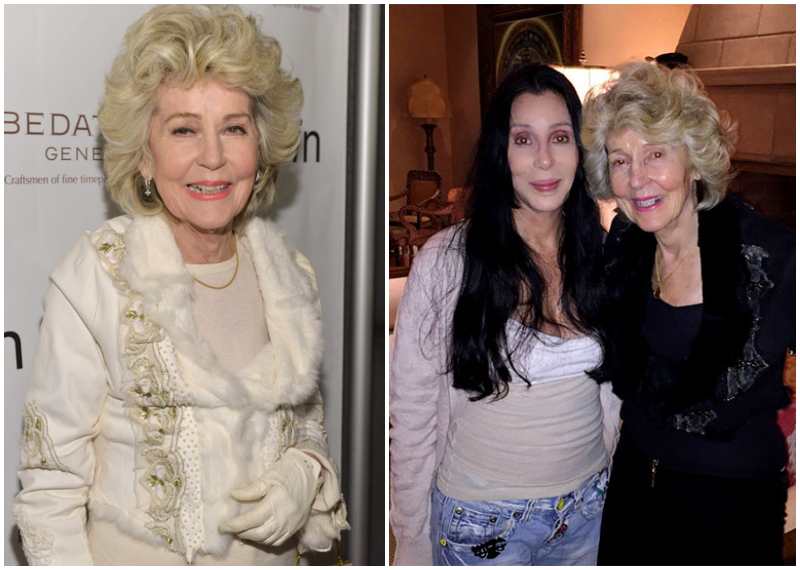 For the most part of her life, Cherilyn was raised by her mother Georgia (the former Jackie Jean Crouch) who was also an actress and a model. They lived with John initially but after the divorce between Sarkisian and Holt, Cher moved with her mum out of the house. They lived in the San Fernando Valley area of Los Angeles and things were tough for them financially. At some point in her life, Cher had to be placed in an orphanage so her mother could look for a good job. 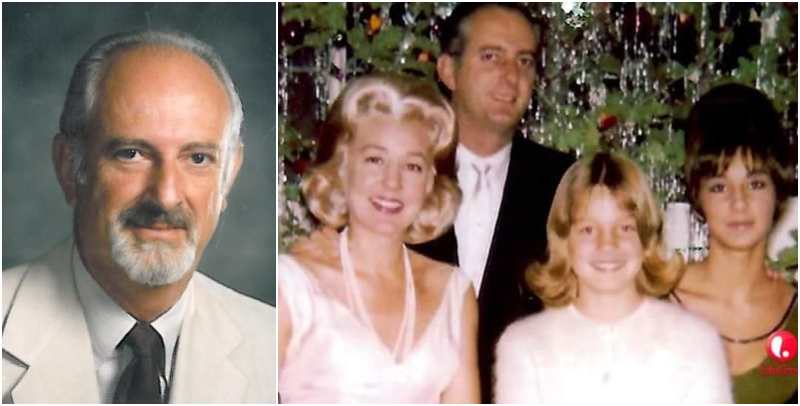 Banker Gilbert came into the picture of Cher’s life after her mother got married to him in 1961. Gilbert ended up adopting both Cher and her sister Georganne (whom eight-time married Georgia had with her second husband John Southall). 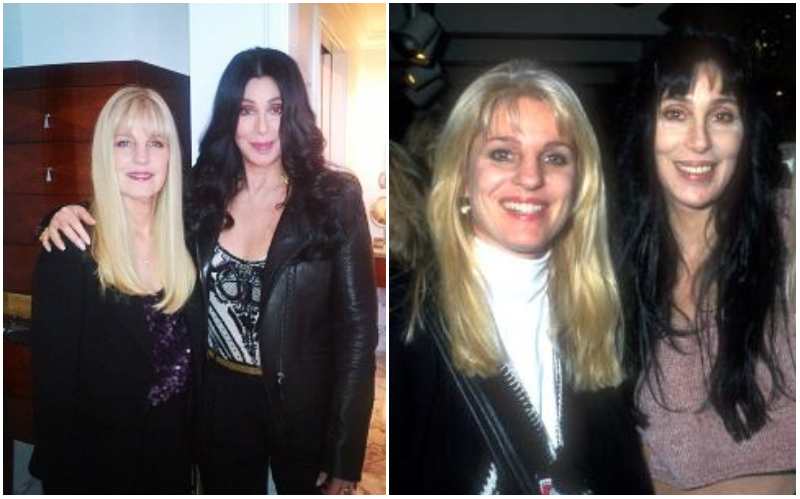 She is the only sibling to the star entertainer and is also an actress in her own right. Georganne Elizabeth Southall (her birth name) is known for her works in General Hospital (1963), The Streets of San Francisco (1972) and T.J. Hooker (1982). She was first married to Michael Madsen but they split and since September 1, 1990, she has been married to Edward John Bartylak. 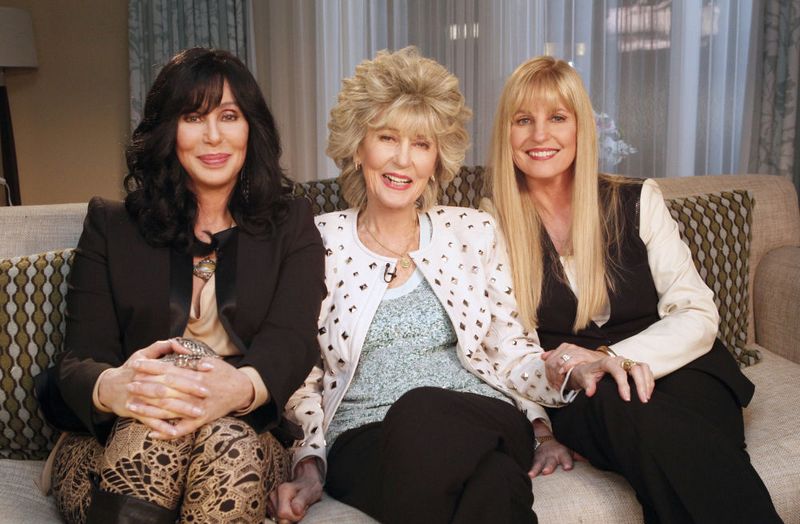 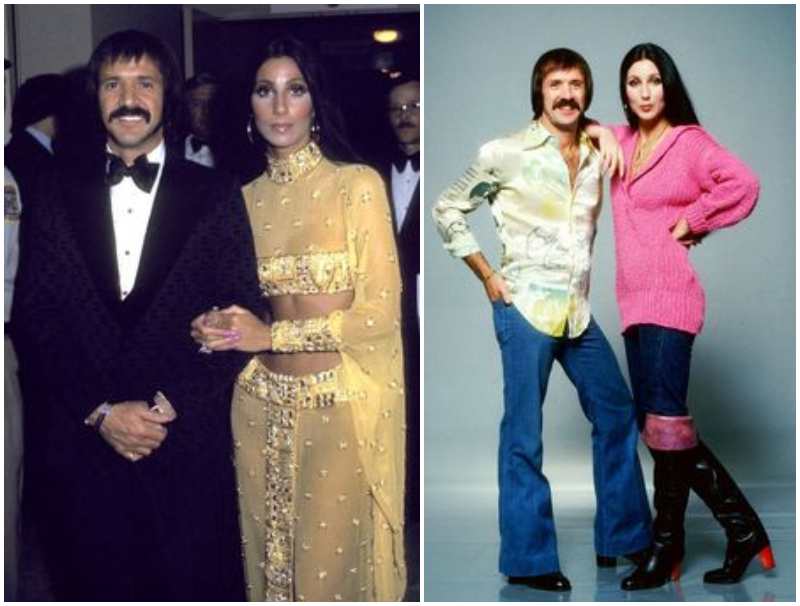 The relationship between Sony and Cher was beyond a mere love relationship. At 16, Cher left high school and moved to Hollywood and that was where she met Bono in November 1962 who was at the time a protégé of iconic producer Phil Spector at a coffee shop. They started off purely as friends and it was even more beautiful that they both had similar interest in music. Along the line, romance began between them and in 1964, both singers got married. It was Cher’s first marriage but it was the second for the 11-year older Bono.

They were known for their 1960s hit song I Got You Babe and more hit songs followed with both lovers becoming popular nightclub acts. Their next venture was The Sonny and Cher Comedy Hour (1971 – 1974) which combined both singing and comedy. The show continued for as long as they were together but as their marriage dissolved, the show also came to a halt.

Some years after parting with the Silkwood (1983) actress, Sonny’s music and acting career waned and he soon found another career path. The former showman transformed himself into a conservative Republican and eventually served as Mayor of Palm Springs, California from 1988 to 1992. He died tragically in 1998 while he was on holiday with his fourth wife, Whitaker. He had skied into a wooden area and collided with a tree on the Nevada side of Heavenly Ski Resort; this caused extensive trauma to his head and ultimately resulted in his death. Cher gave an emotional eulogy at his funeral, calling him “the most unforgettable character” she had met. 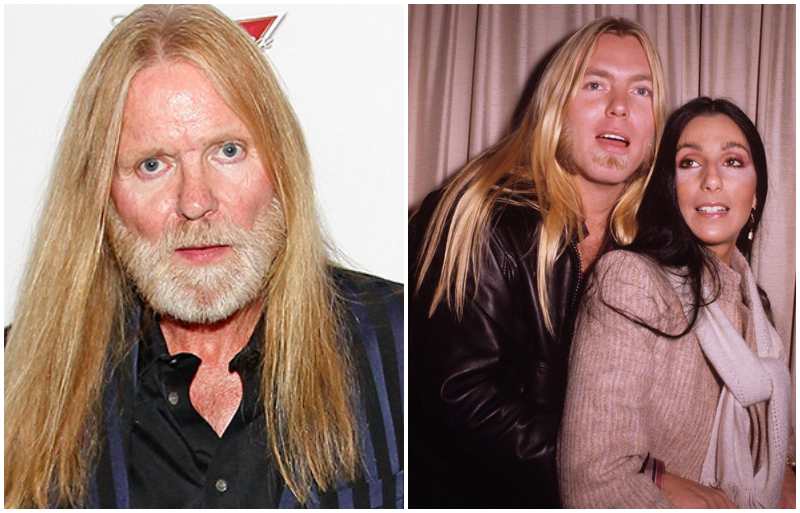 In late June, 1975, only three days after Cher finalized her divorce with Bono, she was in already getting married to the latest love of her life, Gregg Allman of The Allman Brothers Band. Cher and Allman met after one of his gigs and he famously said that she smelled like he imagined a mermaid would smell. The pop diva declared their first meeting the worst first date ever as Allman fell asleep; however, within months, both sweethearts were married.

Four days after they tied the knot, the Cher filed for a divorce only to reconcile with the Midnight Rider singer and they continued together for a few more years. They soon became parents to a son but their marriage unraveled due to Allman’s heroin addiction. 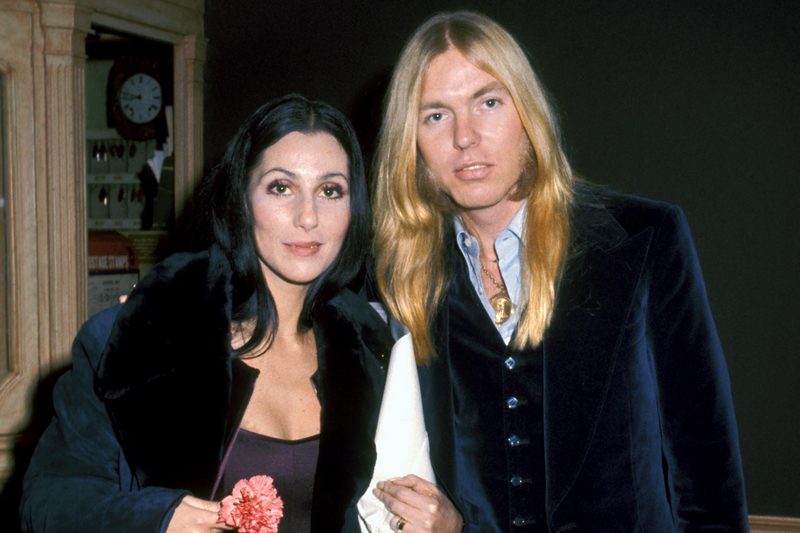 Gregory was diagnosed with Hepatitis C in 1999 and underwent liver transplant in 2010 but he still kept on having issues with his liver. The soulful singer-songwriter and rock n’ blues pioneer later died in May 2017 from complications of liver cancer. Throughout his life, the Whipping Post singer was married seven times and was the father to five kids, each from a different mother. 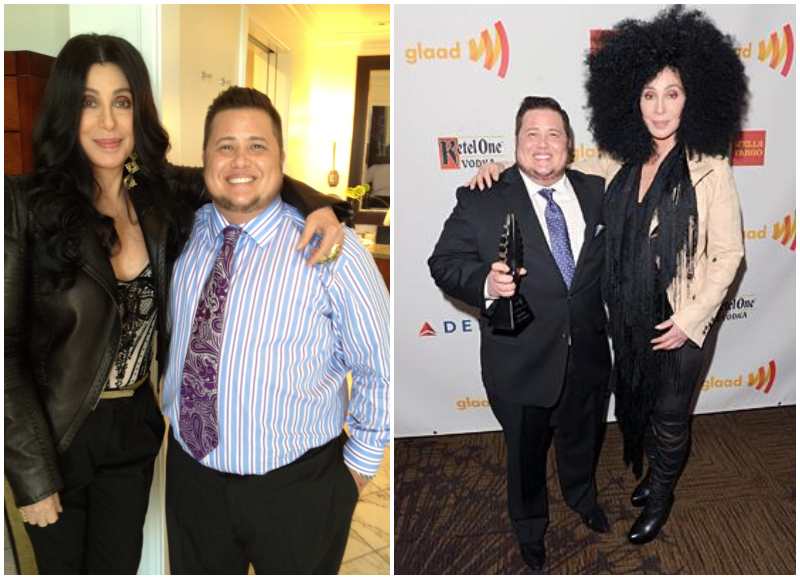 She was initially a girl who was named Chastity Sun at birth. Her first few media appearances were on her parents’ show The Sonny and Cher Comedy Hour (1971 – 1974). The only child of Bono and Cher says she always felt there was something different about herself; she used to look at other girls her age and feel perplexed by their obvious interest in the latest fashion and in the “cutest” boys. She adds that it was when she was 13 that she finally found a name for how exactly she was different; she realized she was gay. 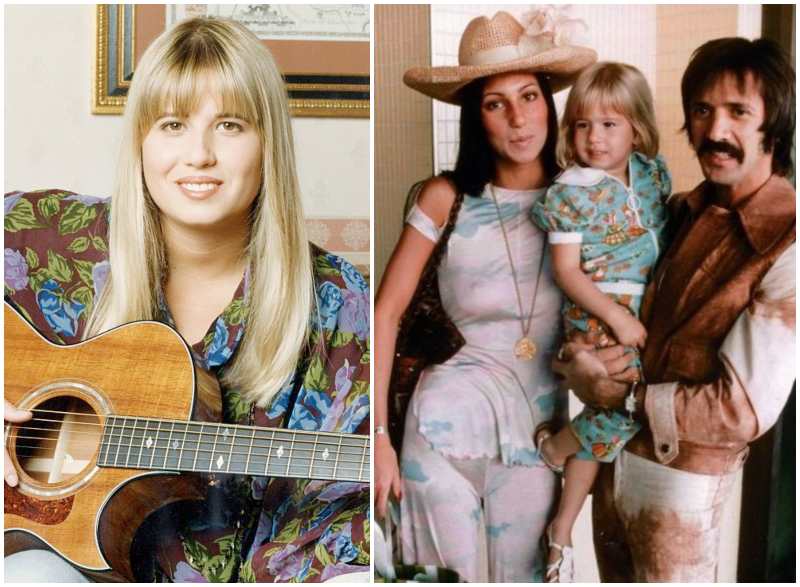 In 1995, Bono publicly self-identified as a transgender man after several years of being outed as a lesbian by the tabloid press. Chastity was back in the tabloids in 2008 after she underwent female-to-male gender transition. He made the whole process legal in May 2010 and this was when he also changed his name. In 2011, Chaz decided to pursue his lifelong goal as a working actor and he is known today for his work on American Horror Story (2016 – 2017). 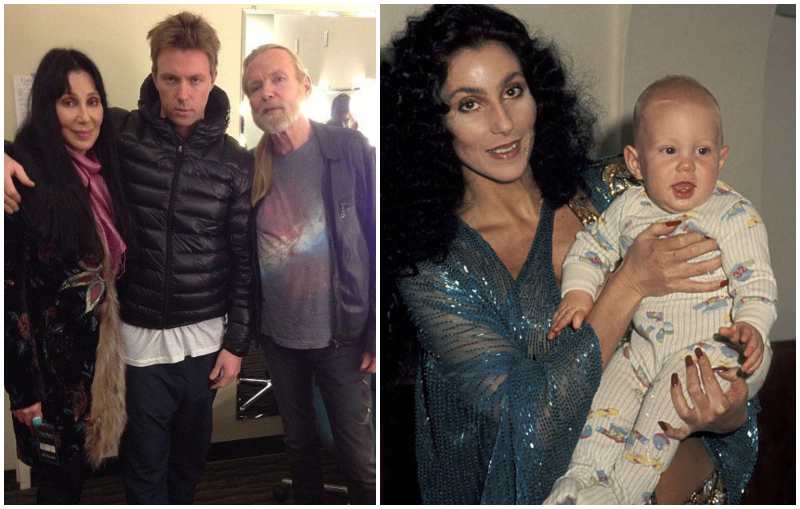 Exeter Blue (his other name) is singer like his both parents. He sings and plays the guitar for the rock band Deadsy. In Elijah’s own words, he felt shunned by his parents when he was much younger. He was sent off to boarding school at the tender age of 7 but as he grew older, he had to make peace with the situation and still love his family all the same.

He has four more siblings, Delilah, Michael, Layla and Devon Allman from his father’s relationships with other women after Cher. On his relationship with Chaz, the younger Allman says they were initially close but they just grew apart somehow. Elijah had a near fatal bout with Lyme disease that was eventually cured by doctors in Germany. 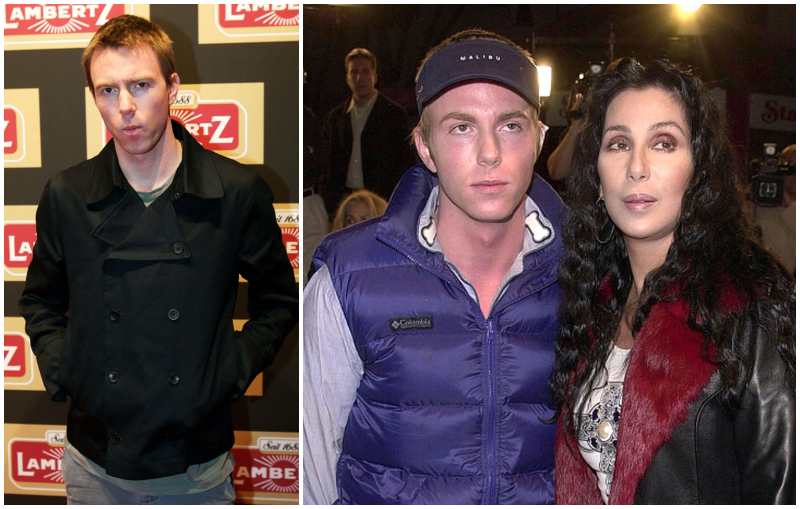 It was indeed a tough time for the singer but one good thing that came out of the illness was that he met musician and opera singer Angie (his now wife) while he was in Germany. On December 1, 2013, the younger Allman married English singer Marieangela “Queenie” King and they are still together till date.