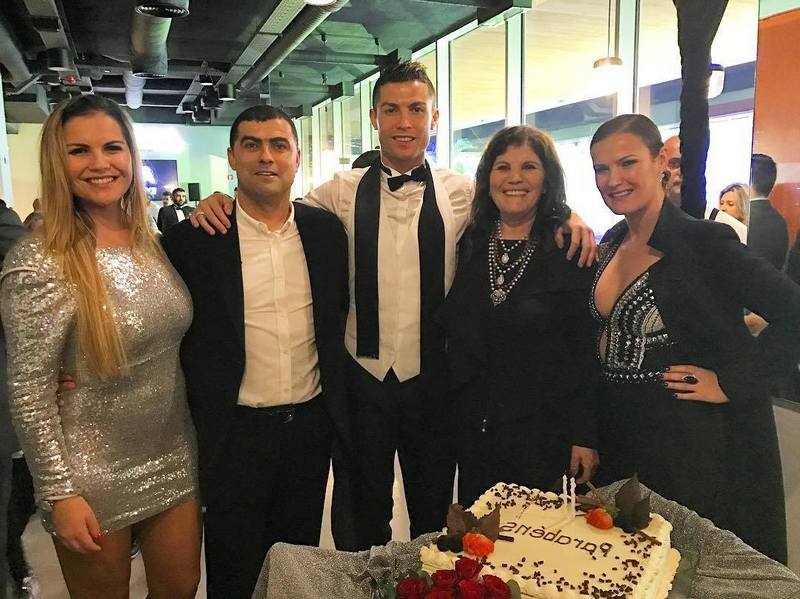 If there is any professional footballer who needs no introduction, Cristiano Ronaldo dos Santos Aveiro is definitely the man. In the history of football and sports in general, just a few people have attained the heights of success he has reached. He is not just the pride of his birth country Portugal, Ronaldo is the pride of his family and the entire athletic empire.

Just recently, Cristiano was named the world’s most famous and best paid athlete. We cannot exhaust all the glorious titles he has to his name but just remember that if anyone has ever been extremely successful as an athlete, Cristiano Ronaldo is the first that would come to mind. In addition to his extreme fame and wealth, he also has the looks by the way so girls are everywhere flocking around him. Let’s find out those who matter most to him amidst all of these successes. 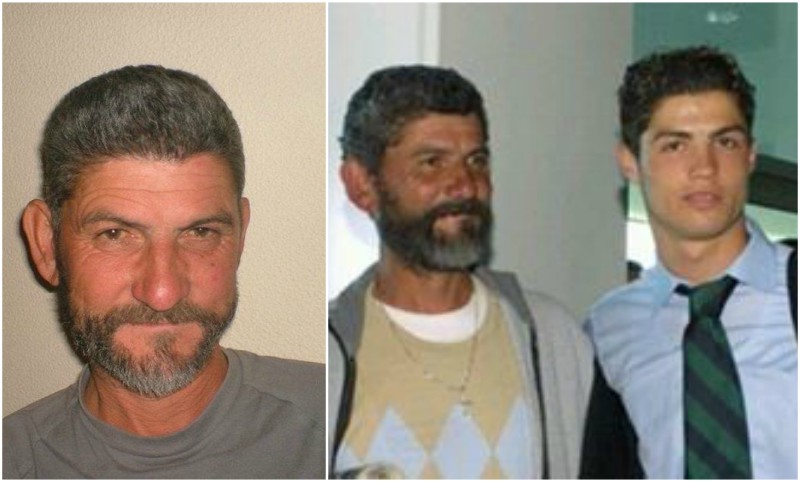 No one knew that he would eventually become Portugal’s all-time top goal scorer but as a child, Ronaldo was already a lover of football. He played for the amateur team Andorinha with his father being the kit man. Many people then mocked CR as his father was the man who tidied up the changing rooms to make extra cash for their family. His father definitely saw how passionate and gifted his son was and kept encouraging him to be better despite the taunts because of their financial status.

Jose Dinis was an alcoholic and Ronaldo even mentioned that his dad drank every day. This was a major reason why they had a non-existent father-son relationship. Sadly, Jose died in September 2005 due to alcohol-induced liver disease. The year 2005 was tough on the world’s most famous athlete as his dad was not able to see all of his successes. 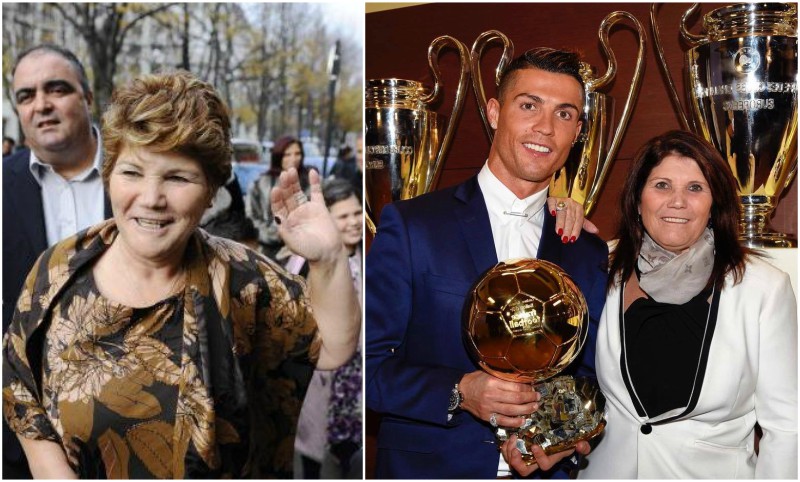 Maria Dolores was a cook and cleaner at the time when her megastar child was born. One thing we never knew was that Maria wanted to abort the pregnancy! Thank goodness she did not because today, her son has been a great blessing to her family and to several other families with his love for philanthropy (his generosity is world class!). Ronni’s mother is his biggest fan and muse; she is the reason behind his undying passion for more and more success.

Mothers have a special place in the hearts of their children, specifically their male kids. When her lovely son was 14, Maria agreed with him that he could give up his education to pursue a professional career in football. She is Roman Catholic and has raised her son to share the same faith. Maria has been more than supportive to her only son; she is indeed the definition of who a wonderful mother is. Dolores is also the proud survivor of breast cancer. 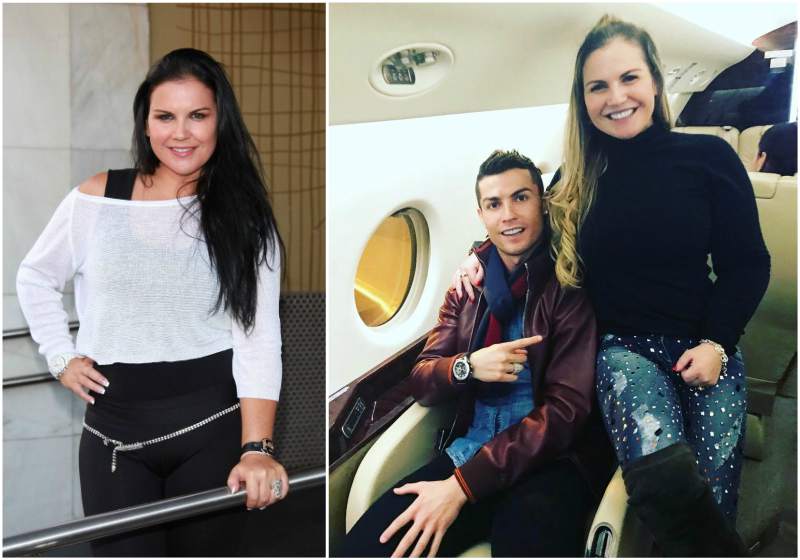 Ronaldo practically has two mums, one is his real mum Maria Dolores and the other is his big sister Katia. She is 11 years older than him and was the second hands that helped take care of him as a child while his mum was busy trying to make ends meet. Today Katia has become a celebrity in her own right with a booming career as a pop singer.

In 2005, when Katia was about to begin her career, she used the stage name “LaRonalda” until 2013 when her stage name became Katia Aveiro. Her media profile was boosted after appearing on the Portuguese version of the reality show Survivor in 2014. Curvy LaRonalda is a fitness fanatic and has a blog that gives tips on how to be curvy and healthy. 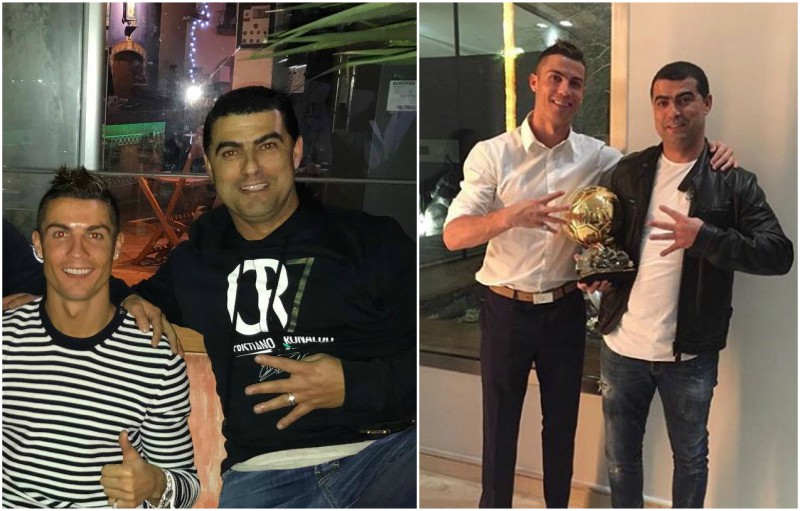 He runs a construction business in their hometown Fugal and is the director of Ronaldo’s museum. “Museu CR7” is the museum that holds all of Cristiano’s awards and trophies. Hugo proposed the idea and has been the man in charge since its inception.

The Champions League with Real Madrid was not just a game for Ronaldo; it was a match that would help his brother out of his addiction to drugs and alcohol. Ronni made a pact with his brother that if he won, Hugo would make the effort to get clean and quit drinking. How thoughtful was that? Both brothers share a lovely relationship and today, Hugo is an ex-drug addict thanks to C. Ronaldo. 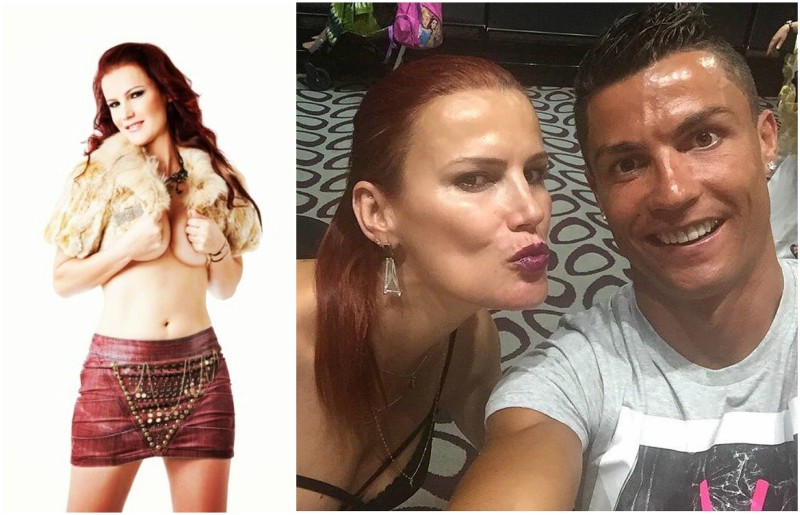 Elma is the more private daughter to Maria Dolores. Like her sister Katia, she also runs a fashion line. 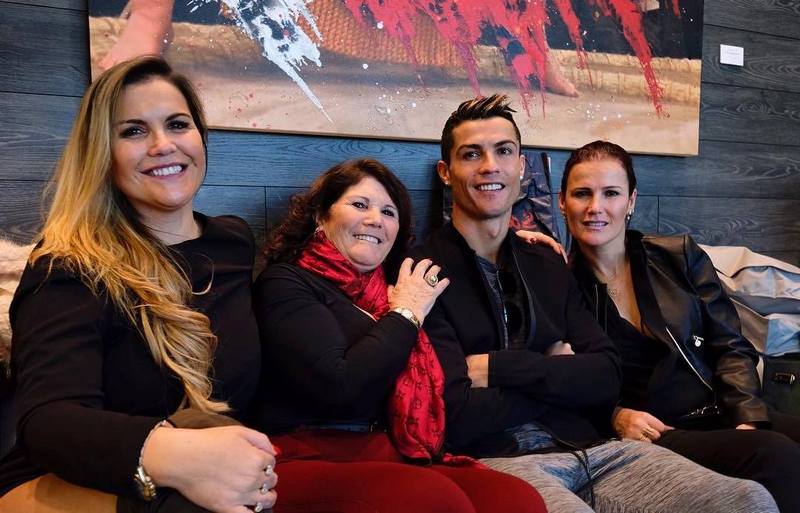 Cristiano with mother and sisters 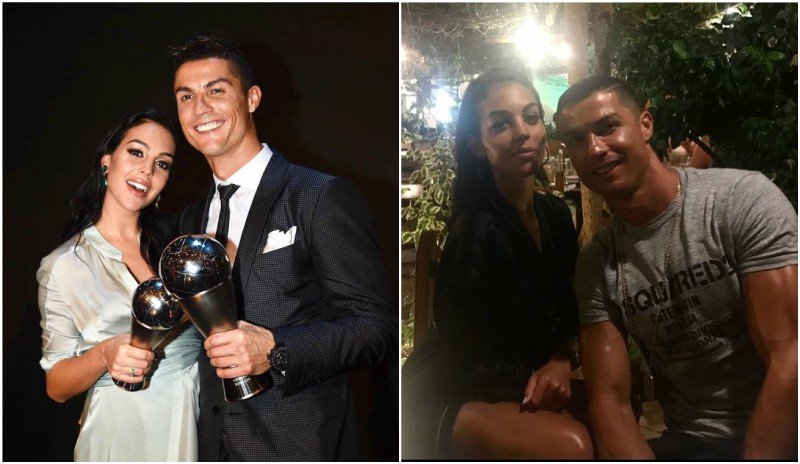 Just recently, the half-Spanish and half-Argentinean model gave birth to her first child for Ronaldo but this makes him a father of four. Rodriguez grew up in Jaca, a city in north-eastern Spain and was first a dancer before changing her career path to modelling. She worked in a Gucci store in Madrid and rumor has that the feminine beauty caught Cristiano’s eye in the VIP area of a fashion event.

They started seeing each other secretly for months but their romance could not be hidden forever. Geo and CR7 have been dating for over a year but he only made their first public appearance together in 2016. She seems to have good mothering skills as she’s doing a good job with Cristiano Jr. and is also expected to play a key role in raising the twins, Eva and Mateo. 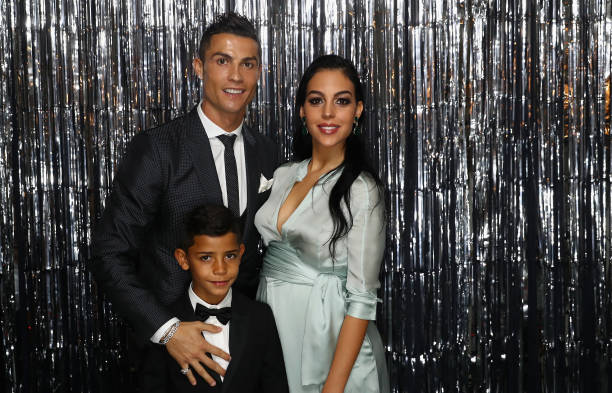 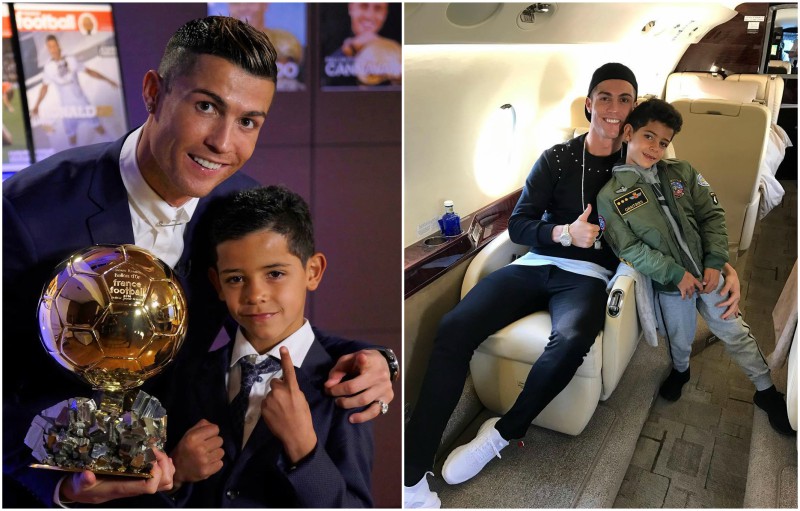 Cristiano Ronaldo Jr. mother is believed to be dead; at least that was what the little inquisitive Ronaldo Jr. was told by his father and relatives. Some other sources however say that the young Cristiano was born via a surrogate in 2010. Around that time, the Real Madrid Star was very desperate to be a father and had no interest in getting married. What option was left other than him paying a woman to have his child for him? Other sources claim that Cristianinho was born after Ronni slept with an American waitress whom he paid $15 million to remain unknown. 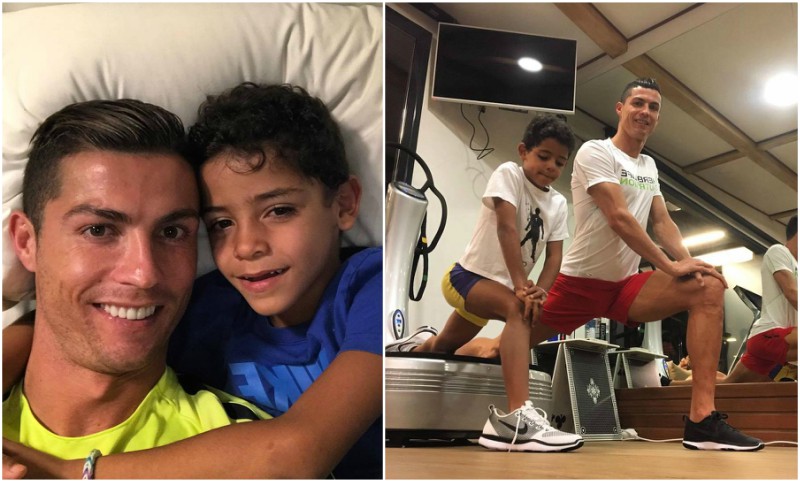 After his baby boy was born, CR7 announced that he had full custody and would raise the child with the help of his mum and two sisters. Since the arrival of Cristianinho (his nickname), C. Ronaldo has become a changed man. Beyond a very supportive family, the Real Madrid Star has a greater reason to be on top his game successfully. His son had opened up a loving part of him we never knew existed. 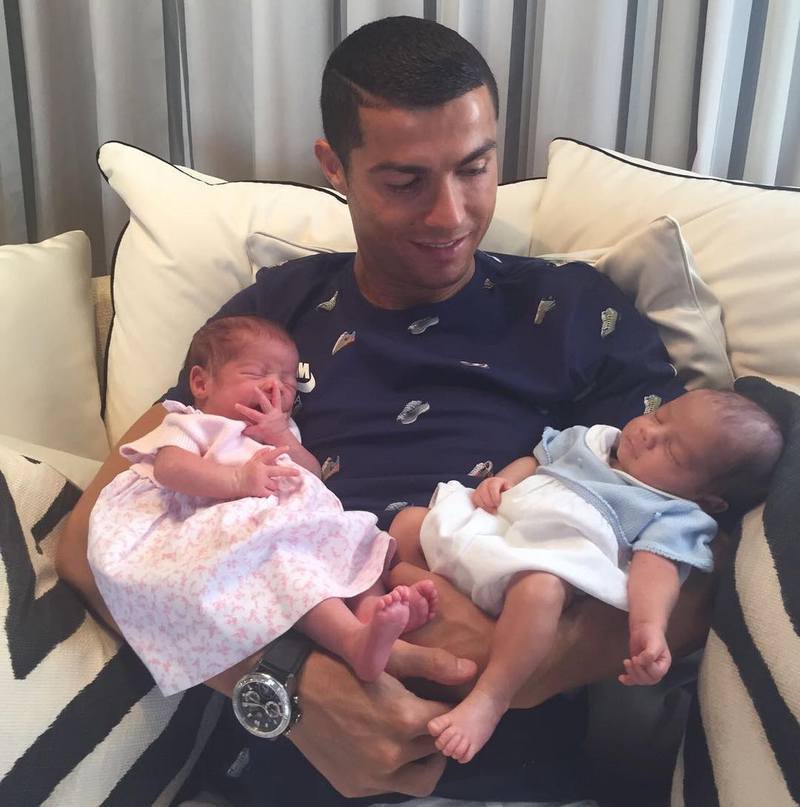 Cristiano became father again and his time it is a boy and a girl, born via surrogate mum from USA. 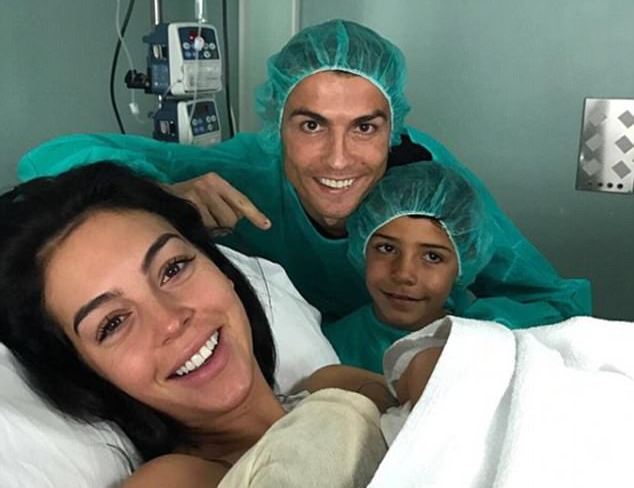 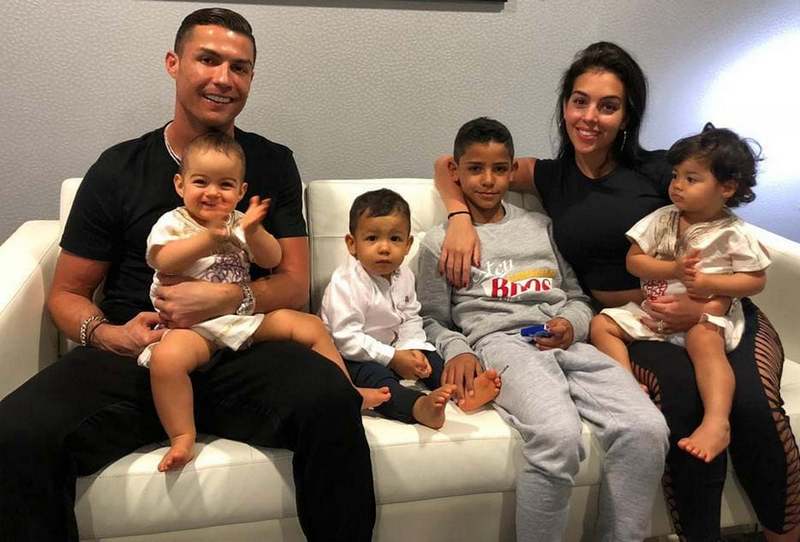 Manny Pacquiao and his supportive family: wife and children
The Big Jonah Hill Feldstein and his wealthy family