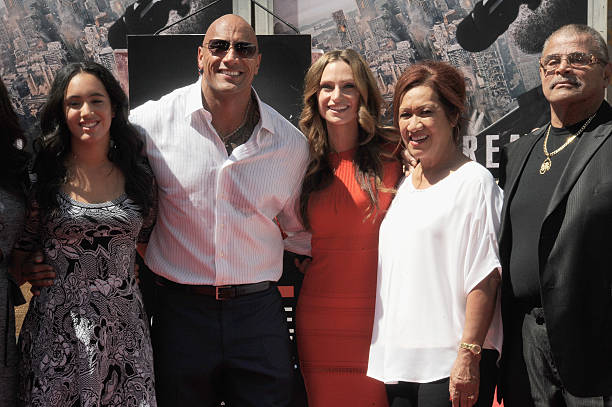 Dwayne Douglas Johnson rose to stardom as a wrestler by the name The Rock but today, his name is synonymous with Hollywood leading men with a Herculean-like body build. Johnson at the very young age of five was already with his father in the wrestling ring and weight room. He grew up watching men wrestle and was a regular member of the gym his father attended. At first, he wanted to pursue a career as a football player but in 1995, he suffered a back injury that cost him his place at the NFL then he eventually settled for a career as a wrestler.

He had his own bout of tribulations in the movie business after his permanent transition in 2003 to life as an actor but as the pro that he is, he was able to weather the storm and get to the silver lining. When he was named the 2016 highest paid actor in Hollywood, it was no fluke as his career has been filled with one huge success after the other.

Most celebrities do not like to share information about their personal life but not the strongly built San Andreas (2015) actor. He is private with some details but is not shy to talk about his family every now and then. For him family comes first as these people are the ones who truly know him, beyond what he displays on our screens. Read on as we go into the lives of these people and who knows, we might learn a thing or two about The Rock himself. 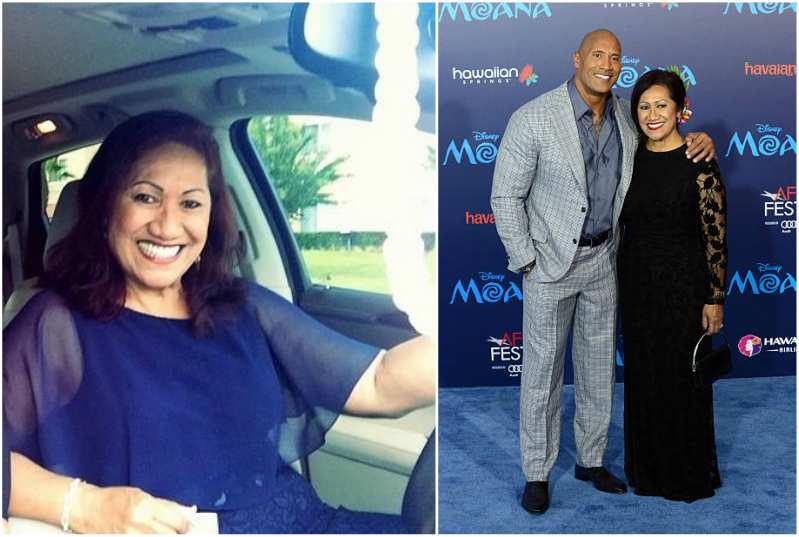 Ata’s father Peter Maiva was also a wrestler and she met Rocky one day when he was a tag team partner with her father for a match. Things got heated so fast and against her father’s wish, she became the second woman to walk down the aisle with Johnson. They had Dwayne and continued together as a family until their divorce in 2003 and they both went solo. It is obvious The Mummy Returns (2001) actor is a Mama’s boy and is not ashamed of it as his mother has been a strong force in his life since she became a single parent. 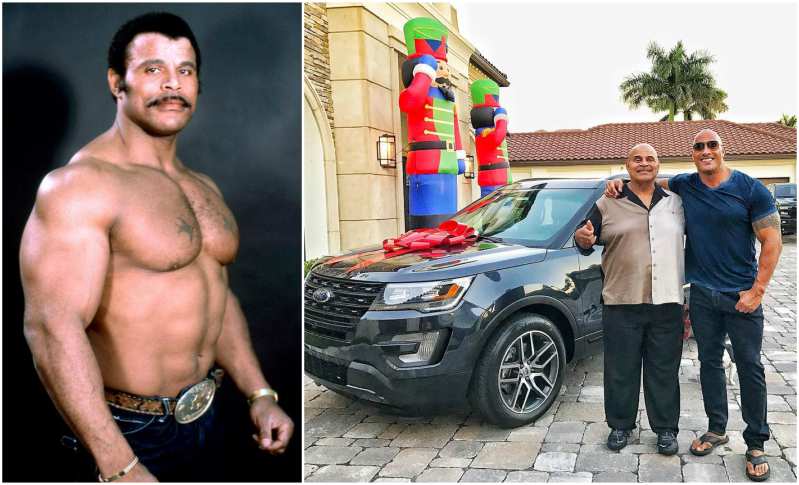 Rocky was born Wayde Douglas Bowles but he legally changed it to a more ‘wrestling friendly’ name in 1964. He moved to Toronto at the age of 16 to pursue his dream in the intimate sports. He became quite successful in the ring but was never wealthy enough to bring home sufficient funds for the family. Johnson married thrice and is the father to three kids; the first two from his first wife Una, Dwayne from his second wife and a third wife Dana Martin with whom he has no child. Less than  year ago, the Ballers (2015 till present) star gifted his father a brand new car in honor of his father’s hard working past years. 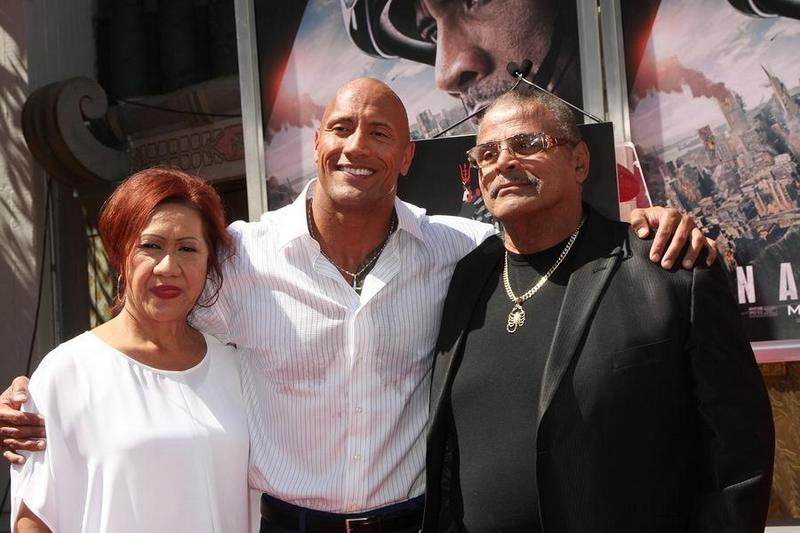 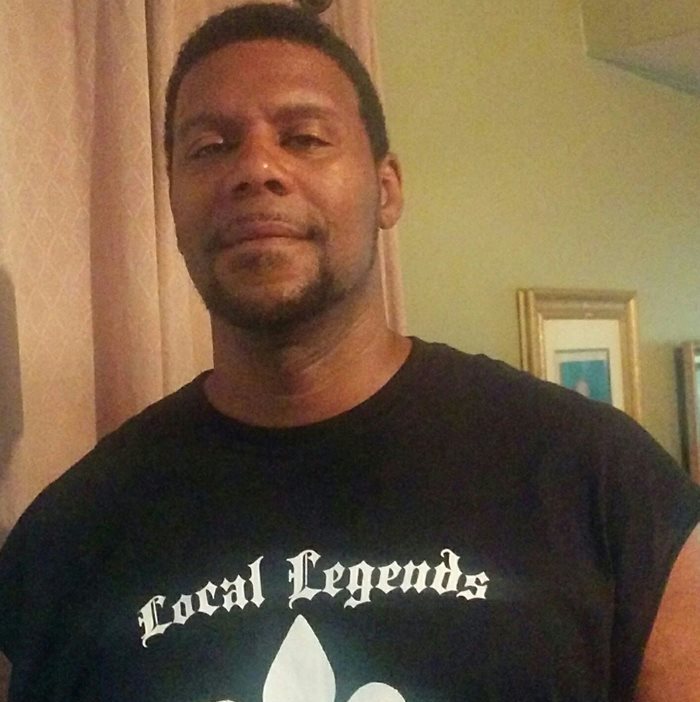 He is the only brother to the movie star even though they are not from same mothers. Curtis is a successful Toronto businessman who also dreams of being a wrestler like his father. 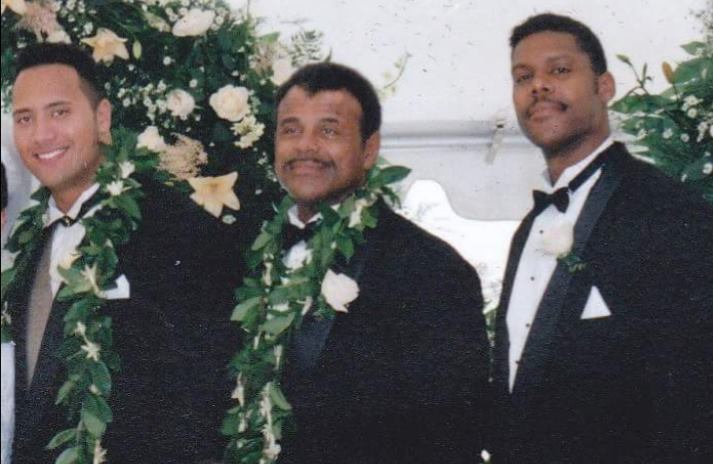 Wanda is Dwayne’s half sister but very little is known about her private life. 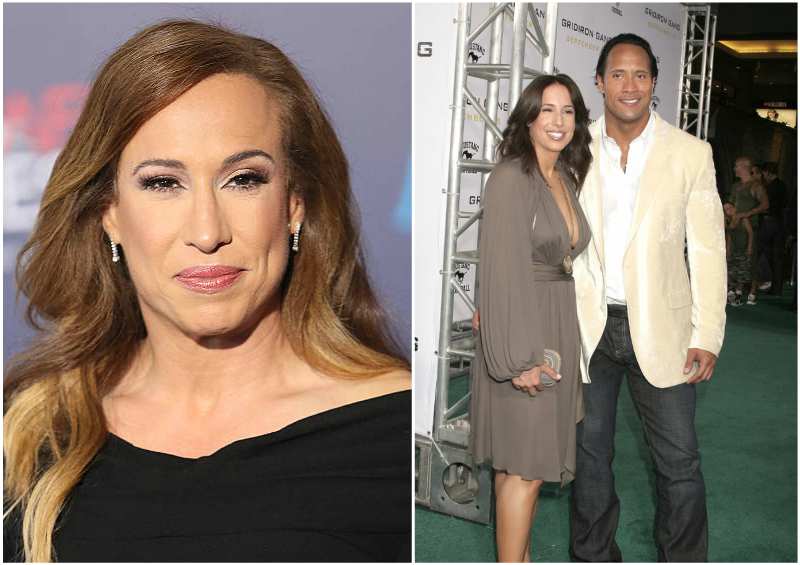 Executive producer Dany is busy shattering glass ceilings, one floor at a time with her impressive resume as a finance executive and entertainment businesswoman. She is the force behind The Garcia Companies, a multi-faceted talent and media management company that has succeeded in managing brands and projects with some of the best humans in Hollywood including the famous Dwayne Johnson.

When Johnson was a student at the University of Miami, he met and eventually married the three years older Dany after a seven year relationship. While they were together, the former wrestling pro made his transition to film and became a father. Things did not however continue as expected as in 2007 both actors decided to part ways. According to the Tooth Fairy (2010) actor, failing in his marriage and as a dad really hit him hard butt he had to pick himself up and move on with life. 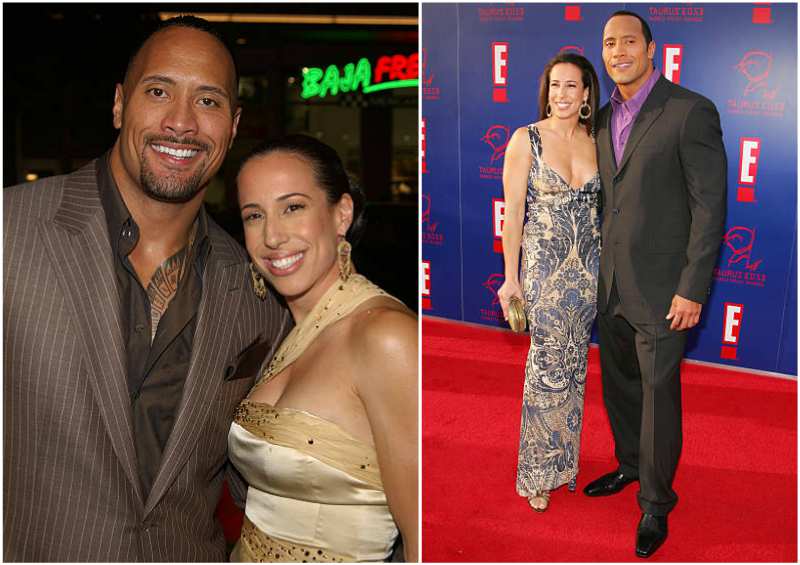 Though they are divorced, Garcia and the famous Baywatch (2017) actor continue to be close friends and devoted parents to their lovely Simone, raising her together as a team. The media empress has been credited severally as being one of the vital parts of the success of the brand Johnson has created today in the movie industry even though she downplays her role most of the times. They continue as business partners and are friends with each other’s new spouse. Garcia is married to fitness coach Dave Rienzi who also oversees Johnson’s fitness regimen; how cool is that?! 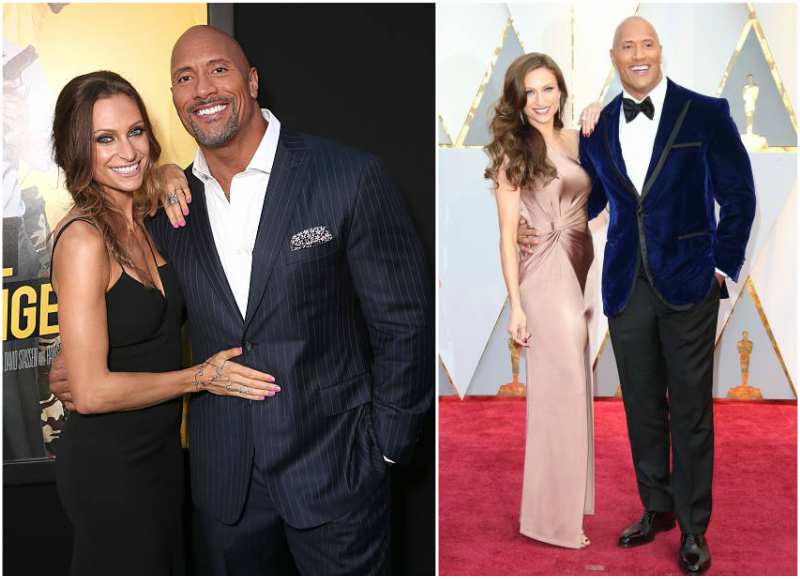 Her mother, Suzanne used to work as a Bunny at a Dallas Playboy club and her father, Sib was a drummer for the ‘80s band, Boston. Lauren grew up pretty familiar to the world of entertainment and decided to become a singer like her father. She appeared on the 2005 competition R U That Girl but did not win unfortunately. A few months ago, Lauren released her latest single titled Go Hard. 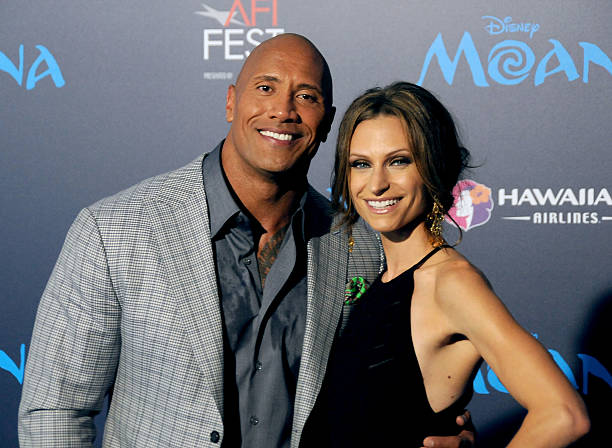 Since they began dating, these lovers have only walked the carpet a few times but it is enough to prove how beautiful Lauren is. They welcomed a lovely addition in 2015 and are now parents to a beautiful daughter even as they remain unmarried. Contrary to the public’s expectations, Hashian is on good terms with Garcia and her daughter Simone. 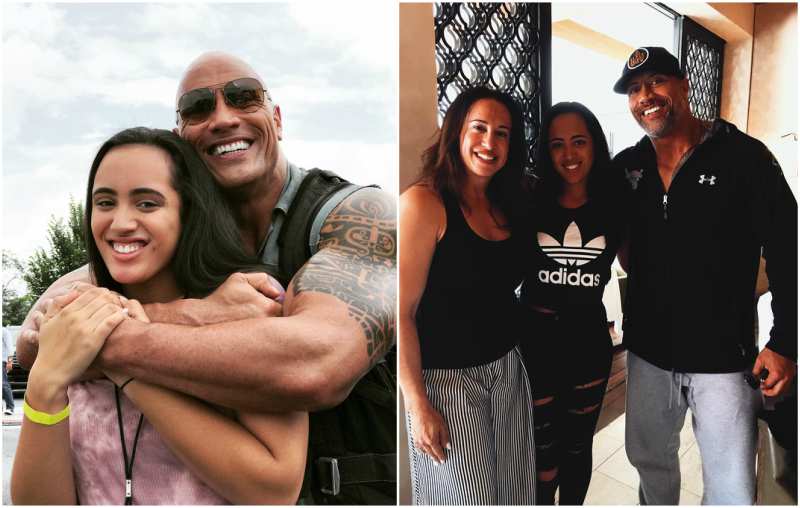 Simone is the stunning first child to The Rock and his ex-wife Garcia. Despite being very private, she admits that it is hard to keep a low profile when your father is Dwayne. 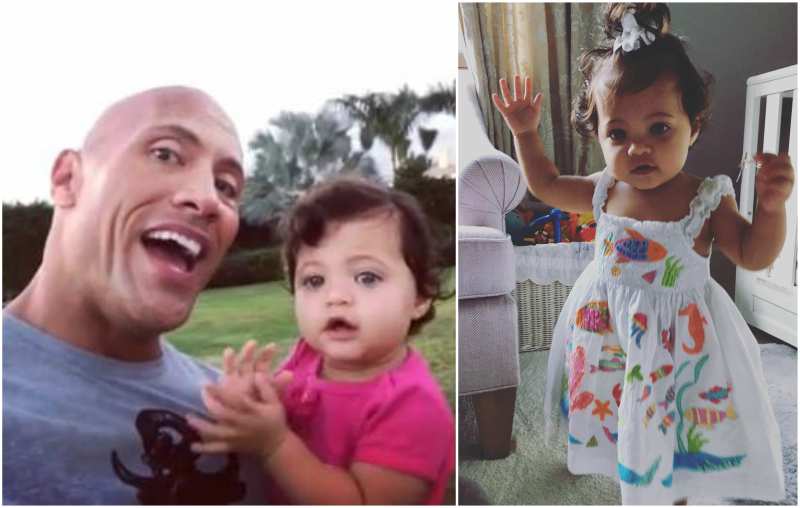 There’s word out there that Dwayne is cute but his baby girl is even cuter. It’s a truth that cannot be denied once you see both father and toddler together. Christmas indeed came early for the Hashian-Johnson bond as the beautiful Jasmine was welcomed in December 2015. Since her arrival, the Moana (2016) star has not failed to give several adorable peeks of how much he loves his daughter. Unlike her elder half-sister, Jasmine is yet to make her first red carpet appearance but has successfully managed to melt Dwayne’s fans into a puddle of mush with her innocent antics. 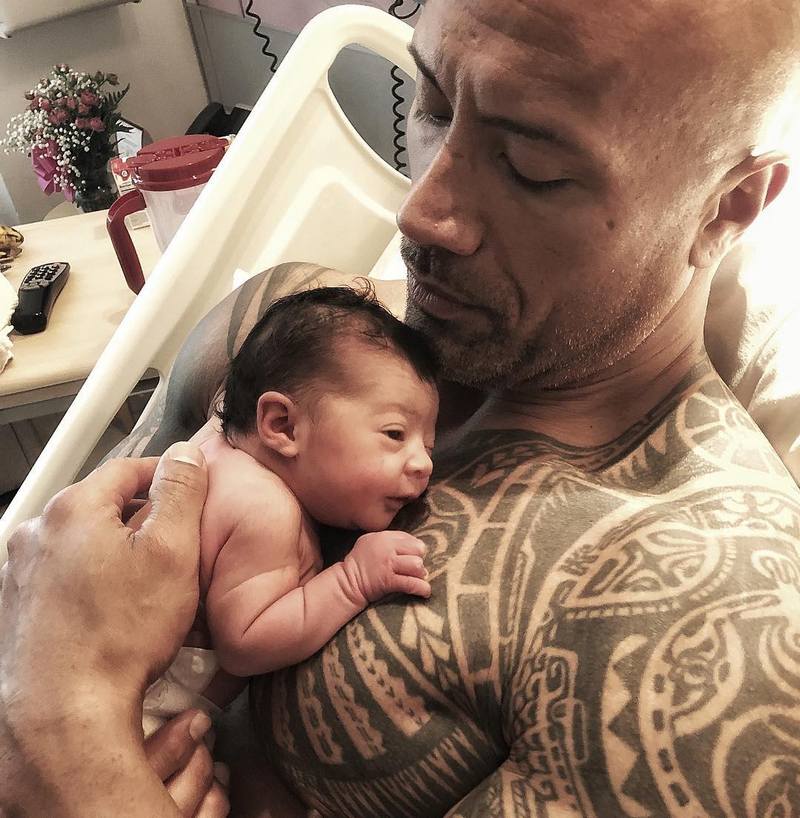 Dwayne took part in Tiana’s delivery. In his Instagram post he wrote: “it’s hard to express the new level of love, respect and admiration I have for …. all mamas and women out there”.