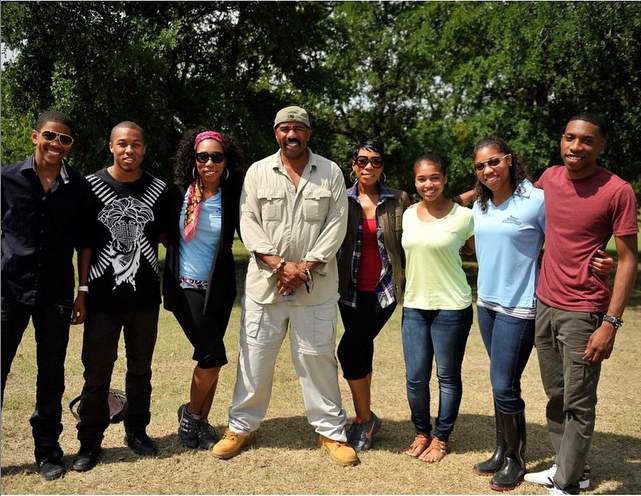 Steve Harvey is living proof that one can re-invent one’s self. For someone who had a pretty rough upbringing, he has achieved enough success for several lifetimes. He is a former stand-up comedian, a two-time Emmy award winner for his syndicated talk show, the owner of a unisex clothing line and the author of two best sellers.

As he grew older, his focus started to shift from just becoming a successful funny man to becoming an inspirational figure. He is the fifth child of his parents and was a serious stutterer as a boy. He was always teased for his speech difficulty and it took him years to focus fully in school. He was the first in his family to go to college but flunked it in his third year and he says not getting a degree is one of his biggest regrets in life.

His lack of degree is one reason why he partnered with a University to start up a project dedicated to encouraging and offering coaching assistance to adults so they can get educated and have a new shot at life. In all his life is one successful adventure and we are more than glad to take you into this interesting read about all the members of his ‘large’ family.

He was a coal miner when his son was born and by the time the youngest Harvey was four, the family moved to Cleveland and Jesse switched to construction. He had no money and what he made was barely enough for their survival but he thought his son a great work ethic. The street the Harvey family lived on in Cleveland was later named Steve Harvey Way in 2015 in honor of the great icon. 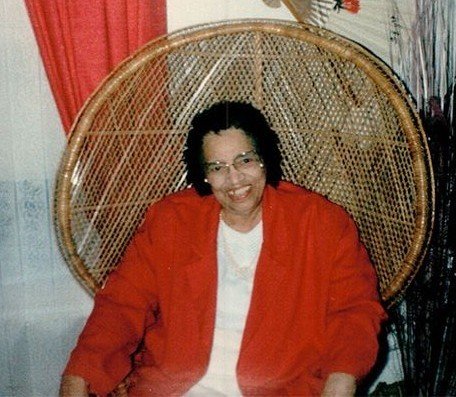 Eloise was a homemaker who had Steve when she was 42. According to the famous storyteller, he was a surprise baby to his family. She was a very loving mother and thought her son the Christian faith. 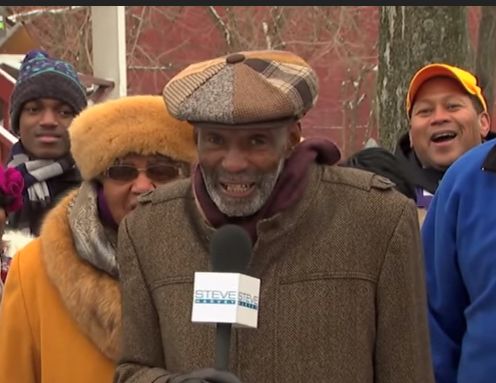 Terry is the other Harvey brother but unlike his brother, he leads a quite life. 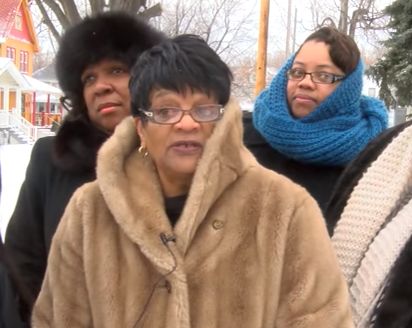 She is another member of the Harvey brood. 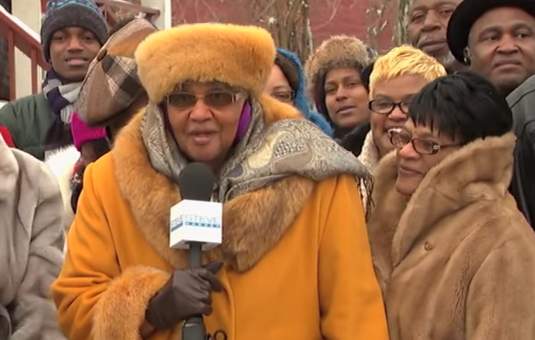 She is another sister to the comedy icon. 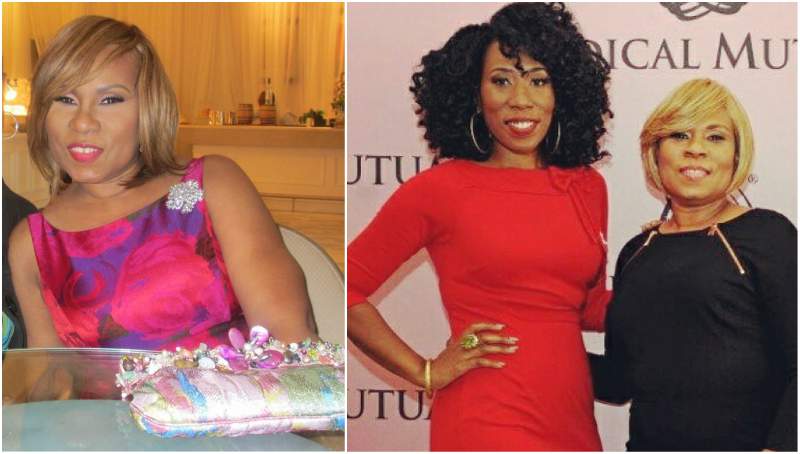 After he left his college program in advertising, he took on several odd jobs and even toiled in a Ford auto plant. He got hitched for the first time at the age of 24 to Marcia and a family started in no time. They had been introduced by a mutual friend at a reception party and reportedly could not take their eyes off of each other. The two lovers dated for less than a year and got married and in a few years became parents to twins. Things started turning sour in about a decade into their marriage and they both took a break.

They were first separated in the late 1980s and the famous Harvey was left with no choice but to endure a few years of homelessness on the road. He lived largely out of his car and during that period, who he is today was gradually shaped. After his divorce from the author, the practising Christian admitted that he was not ready to be a family man at the time and he later realized he had shortcomings as a fully grown man. 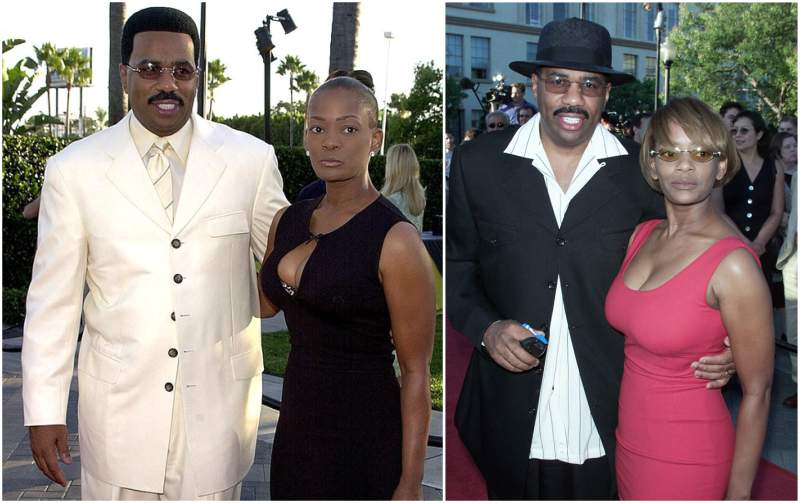 They had met in January 1989 where he was working at an Arlington comedy club and it was love at first sight. Steve gave marriage the second attempt again in 1996 when he married Mary but again after they divorced, he stated that their union was just a coming together of two wrong people and he takes the blame for all the poor decisions he made.

Mary Lee (now Shackelford) filed a lawsuit against the comedy star seeking $60 million for the ‘soul damage’ he caused while they were married; she also claims that he took their sons and left her all by herself. Harvey’s lawyers however came to the rescue saying the allegations were meritless and completely false. Mary was once imprisoned for violating a court order. 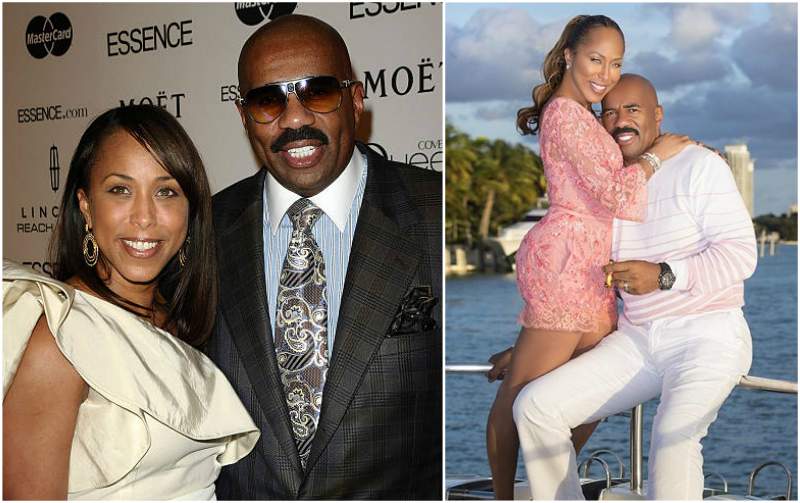 Instagram Star Marjorie is a fashion aficionado who created the blog The Lady Loves Couture. She was successful in her own right before meeting the generous philanthropist but was nowhere as popular as she is today. Marjorie Bridge-Woods was previously married first to Jimmy Townsend, a drug dealer and criminal and secondly to another well-known drug dealer Darnell Woods and was the mother to three children. 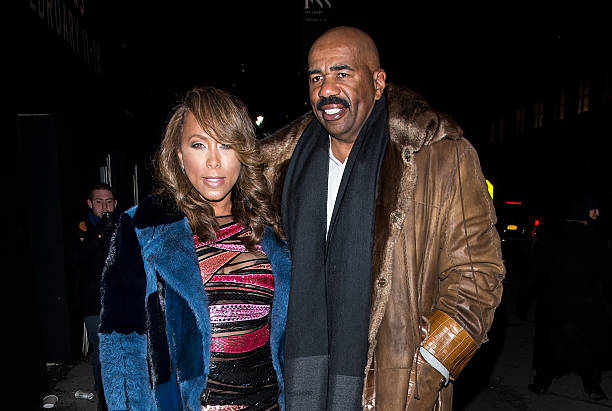 The power couple met in 1990 at a Memphis Comedy Club where Steve used to work. He was still with his first wife at the time but they describe this meeting as love at first sight. The wannabe comedian even announced from the stage that he would marry Bridge-Woods but they were both married at the time. After this first casual meeting, they dated then drifted apart for almost two decades before meeting again finally and organizing a grand wedding ceremony. He described his reconnection with the bang stylist as a rebirth for him as she is credited as being the muse for several of his achievements today.

Marjorie and Steve are one adorable couple who never fail to dole out public praises of themselves. The lover boy said his third wife is the most rewarding thing to ever happen to him and her arrival gave him a new shot at life and a passionate romance he never knew he was capable of. The pretty Elaine says her husband is her soul mate and best friend but it always drives her crazy that he is so messy but this ‘shortcoming’ is nothing compared to their enviable romance. 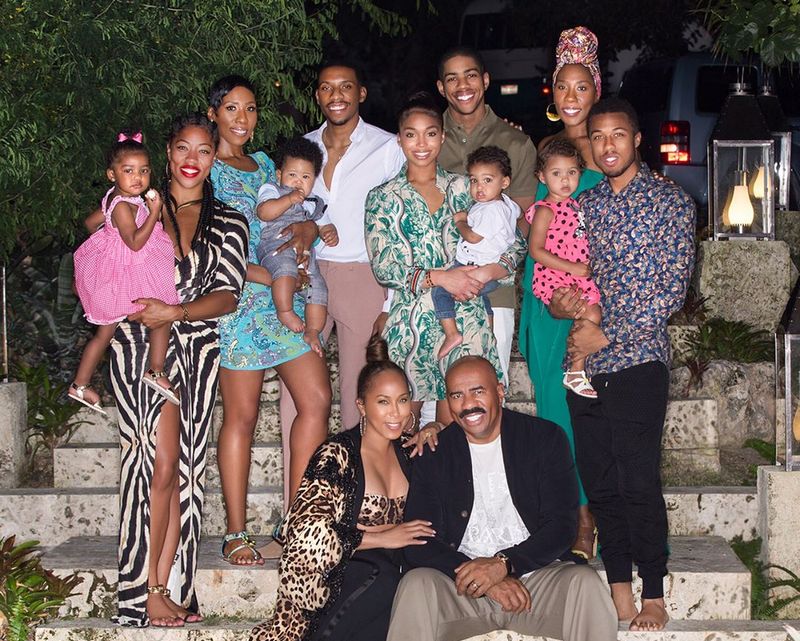 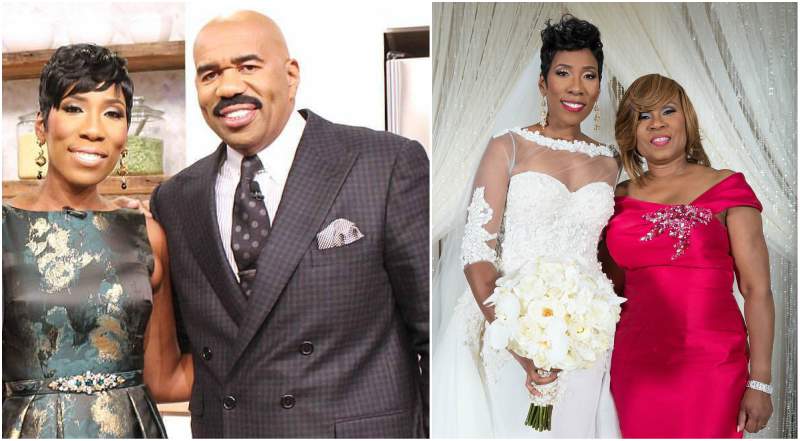 Karli with father and mother 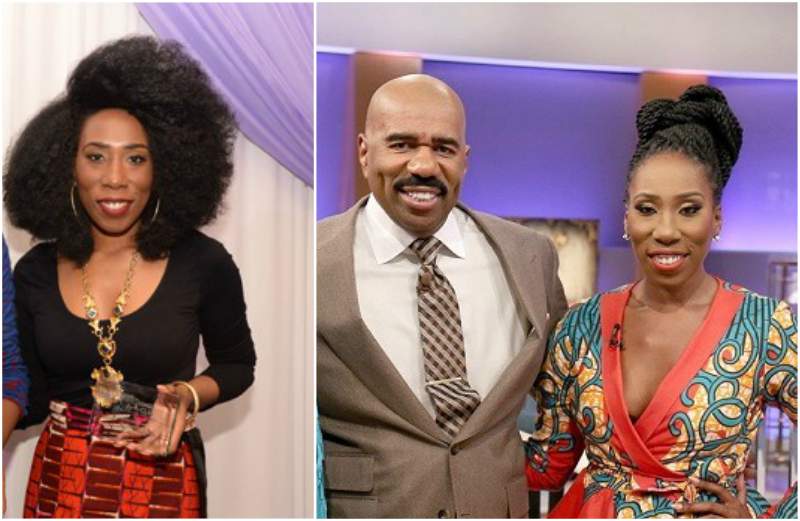 Karli has made a few appearances on her father’s eponymous talk show and has gained massive followership on her social media account for her status as a daughter to the celebrity entertainer. She has been married to Benjamin Raymond since 2015’s autumn and is the mother to a male child Benjamin Troy Raymond (born in 2016). 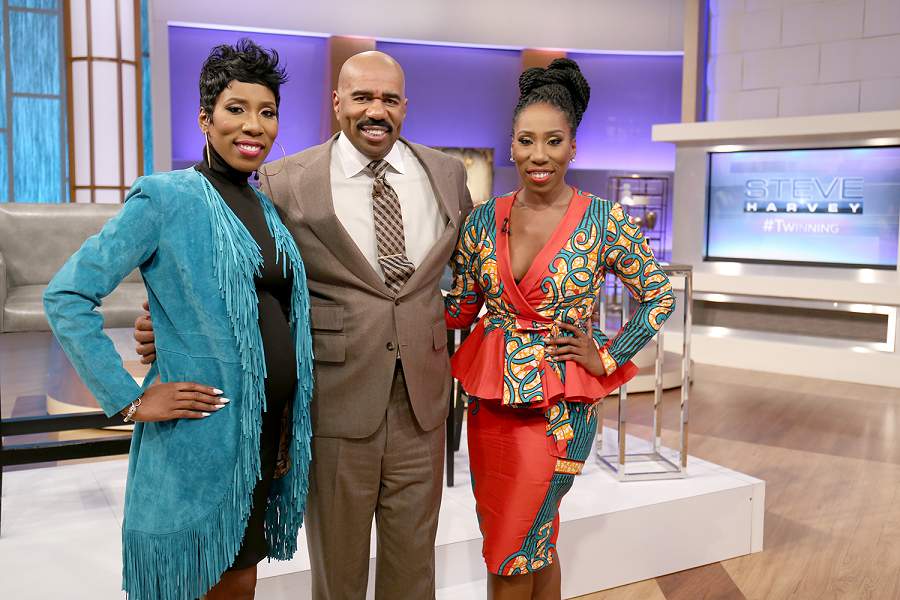 Brandi is the other twin daughter and together with her sister Karli, they are the eldest of Steve’s children. She spoke once at the annual Disney Dreamers Academy in Florida. 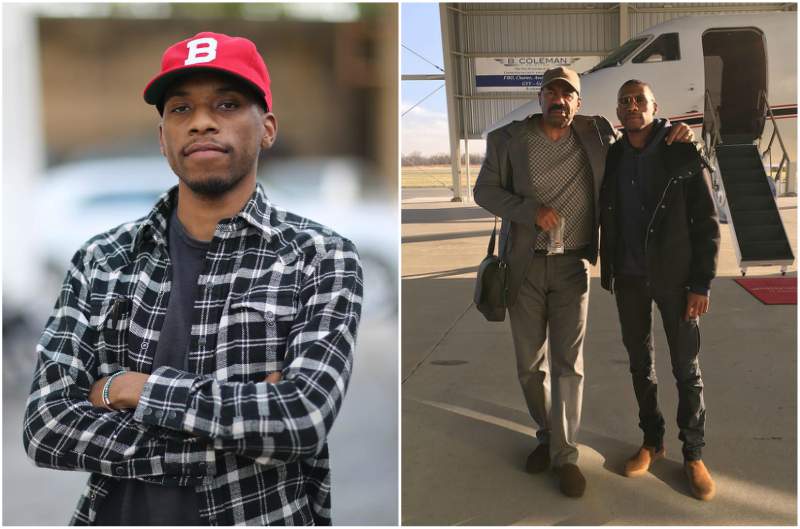 Broderick is the first son to the famous talk show host and is the first child with ex-wife Marcia. He owns a podcast called 85 South Show. 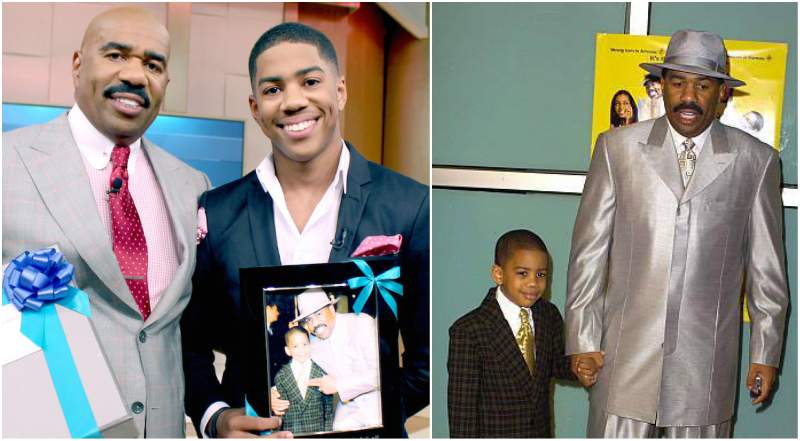 Like his elder sisters, he has also been on Steve’s show and refers to the international star as his idol. Wynton is the second child to the second wife Mary and has been in a relationship with blogger Taylor Gordon since July 2016. 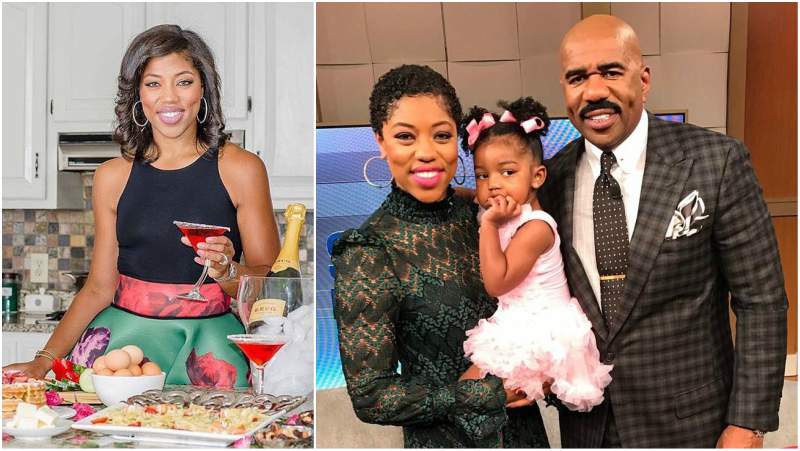 She is the oldest step-daughter from the fashion expert’s previous marriage. 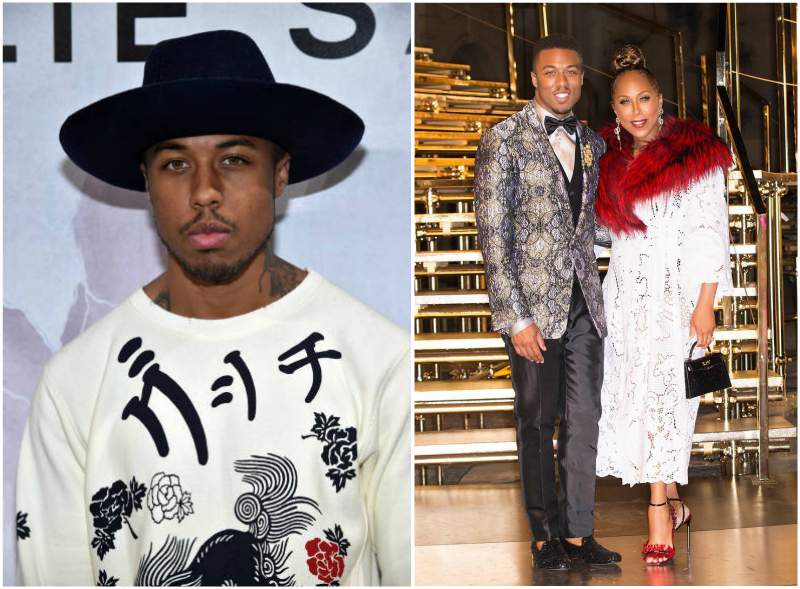 Jason became his son when he married Marjorie and took legal custody of her three kids from a previous relationship. Steve is so large hearted that all his step children fit perfectly into the family and he loves them like he is their biological father. 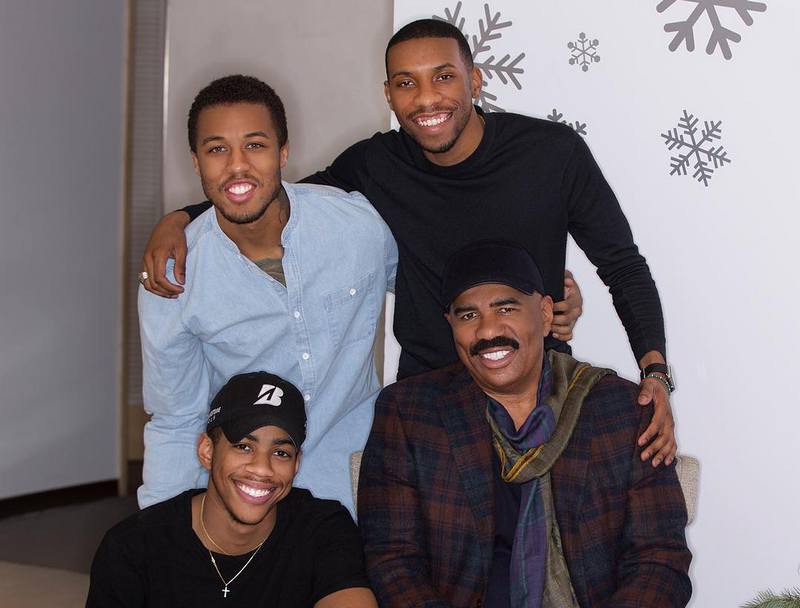 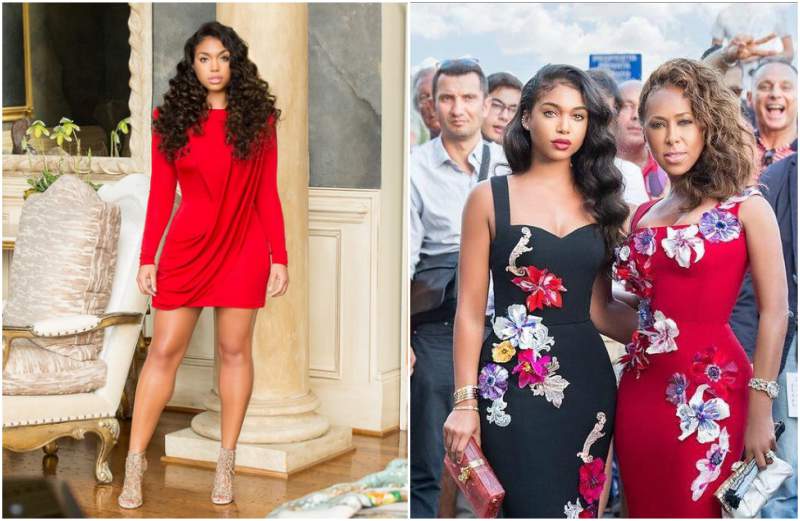 Lori is an aspiring model and became one of the Harvey children after her mother married the radio host. She is his youngest step-daughter and since June 13, 2017 has been engaged to Dutch pro soccer player, Memphis Depay. 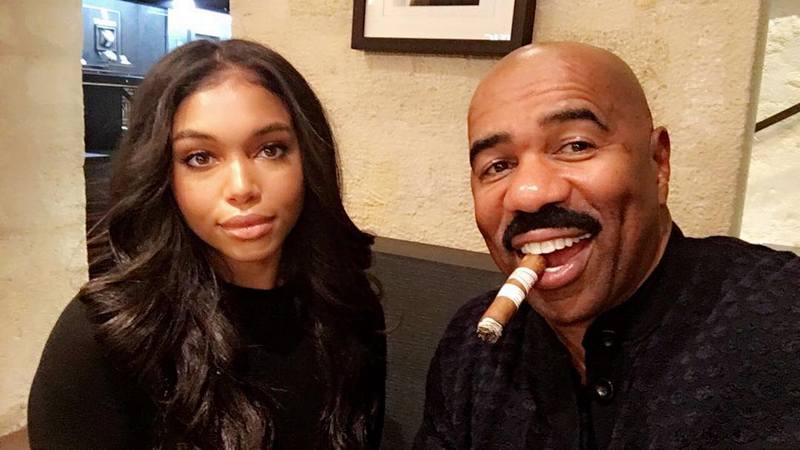