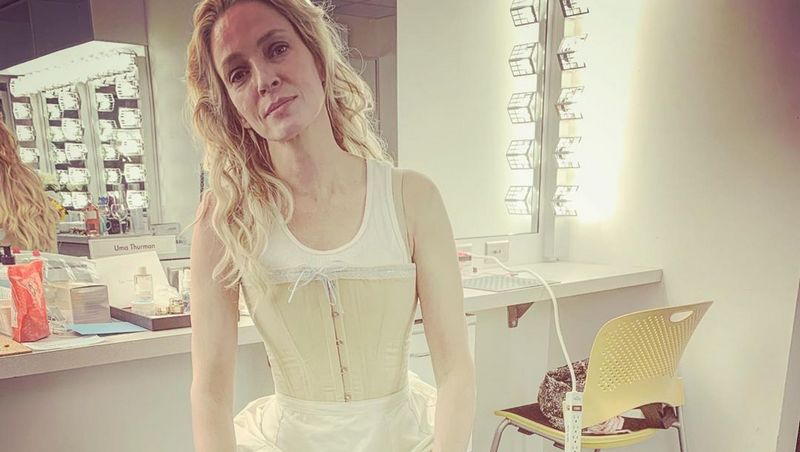 Uma Thurman proves to be such a versatile performer that it’s hard to tell which her movie is the best one. Apart from acting and being Quentin Tarantino’s muse, she also deals with modeling and has collaborated with such brands as Lancome, Louis Vuitton and Givenchy.

Uma Thurman’s modeling career started in 1985 and the same year, she appeared on the cover of British Vogue. In 1987, she made a screen debut in Kiss Daddy Goodnight but became an international star in 1994 after having the lead part in Pulp Fiction. Uma’s other famous movies include Dangerous Liaisons, Gattaca, Les Miserables, Kill Bill, My Super Ex-Girlfriend, The Accidental Husband and Motherhood. Additionally, she is a social and political activist as well as a member of charitable organization Room to Grow, helping people in need. 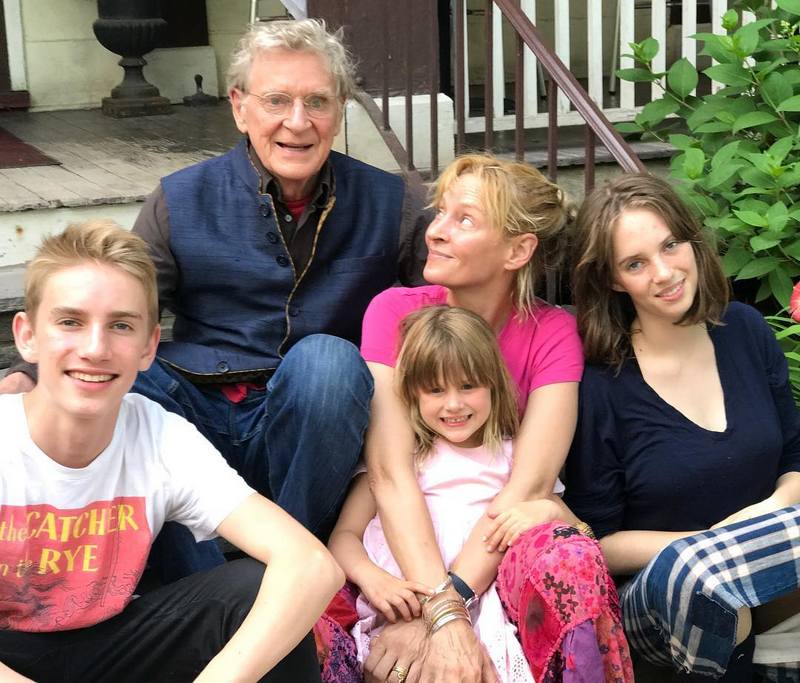 Robert is a professor and writer dealing with Buddhism theme. He even brought up his kids as Buddhists. Moreover, he teaches at Columbia University along with being a co-founder of Tibet House New York. By the way, his mother, Elizabeth Dean Farrar, was a theater actress. In 1961, Robert lost his left eye while repairing his car and has an ocular prosthetic. At 18, he espoused Marie-Christophe de Menil but their marriage was dissolved. Later, he tied knots with Nena, a mother of his 4 kids. In 1997, the celebrity’s dad was called one of 25 most influential Americans by Time. 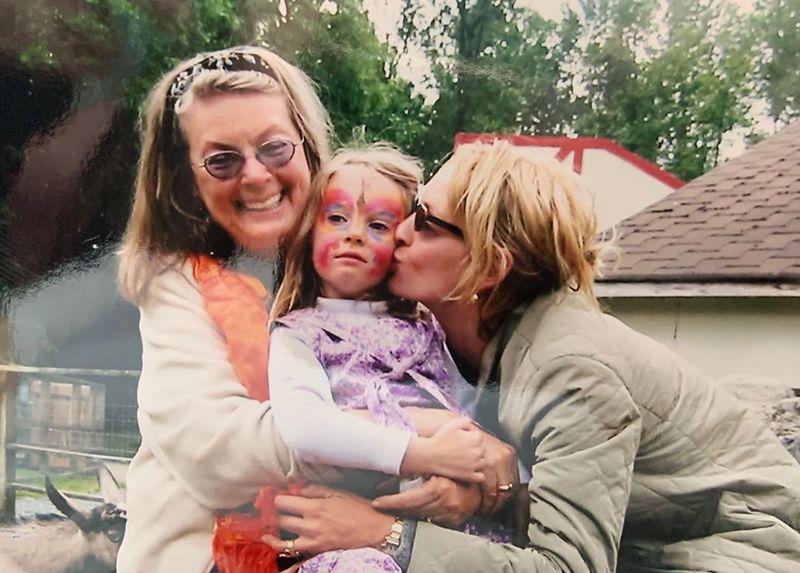 Keeping German and Swedish roots, Nena was a model and psychotherapist. Now, she is a managing director of Menla Mountain Retreat. Nena was a wife of Timothy Leary in 1964-1965. In 1967, she got married to Uma’s dad. 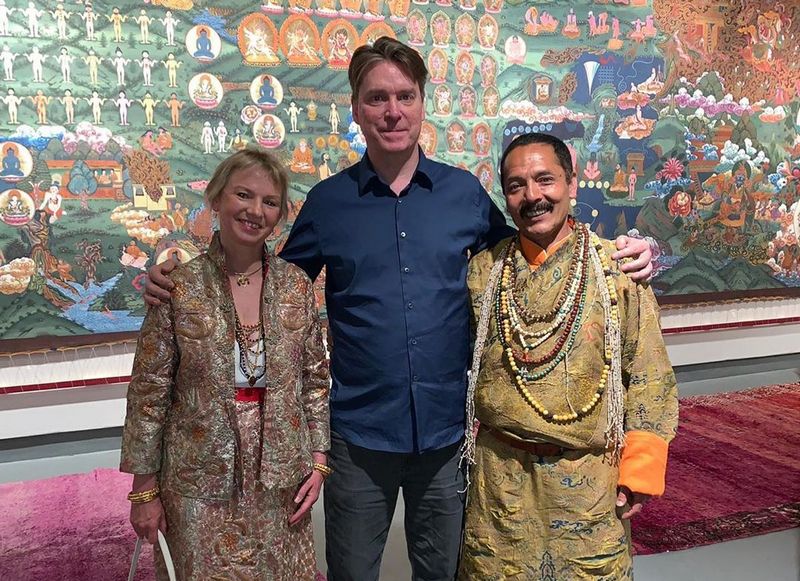 Ganden Thurman (in the middle)

Ganden is an executive director of Tibet House. Also, he was a production assistant of Julian Po movie. 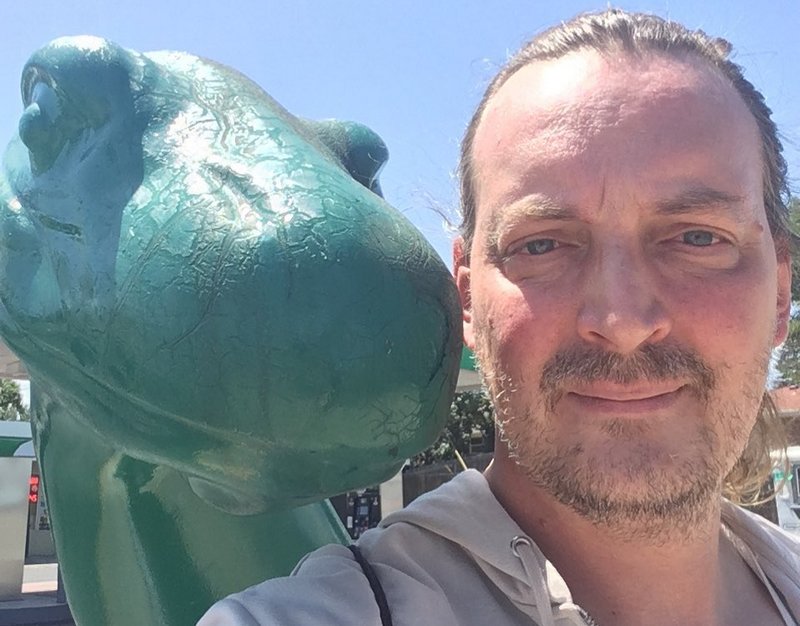 Dechen is a yoga teacher and holistic healer. He also tried his hand at acting in Dead Layer, The Truth about Cats & Dogs (alongside his stellar sister) and Zoolander. 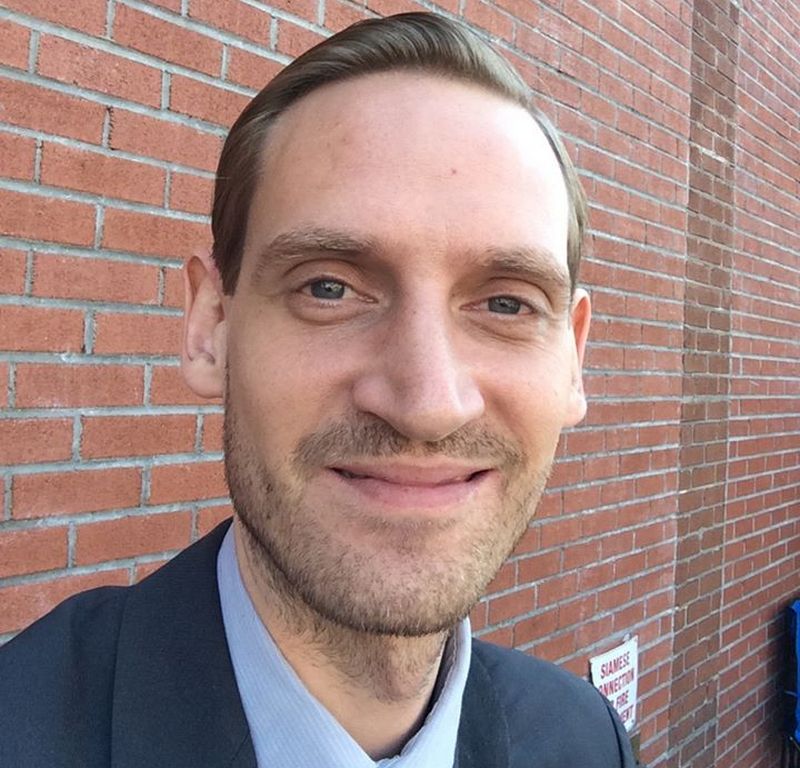 Mipam is a real estate salesperson at Compass agency in Brooklyn and is a dad of an adorable daughter. As an actor, he appeared in First Wave. 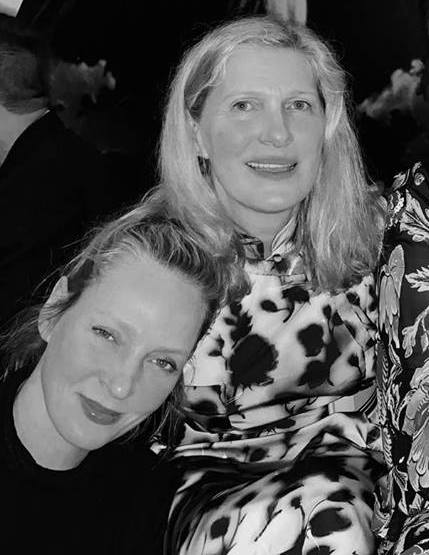 Taya is Uma’s sister from her father’s first marriage with whom she started to communicate only when she was in her 20s. Living in New York, she was married to Christopher Snow. Moreover, Taya is a mother of Dash Snow, an artist who died of drug overdose in 2009. 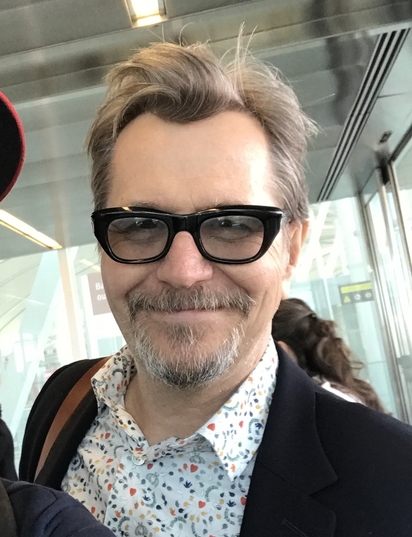 Gary is an actor and filmmaker. He met Uma while filming State of Grace. They got hitched in October 1990 but got divorced in 1992. Thurman shared that it was impossible to live with Oldman. By the way, Uma is the second of Gary’s five wives. He was previously married to Lesley Manville, a mother of his son Alfie. Later, he was a husband of Donya Fiorentino, with whom he shares 2 sons, and Alexandra Edenborough. In 2017, Oldman married author Gisele Schmidt. 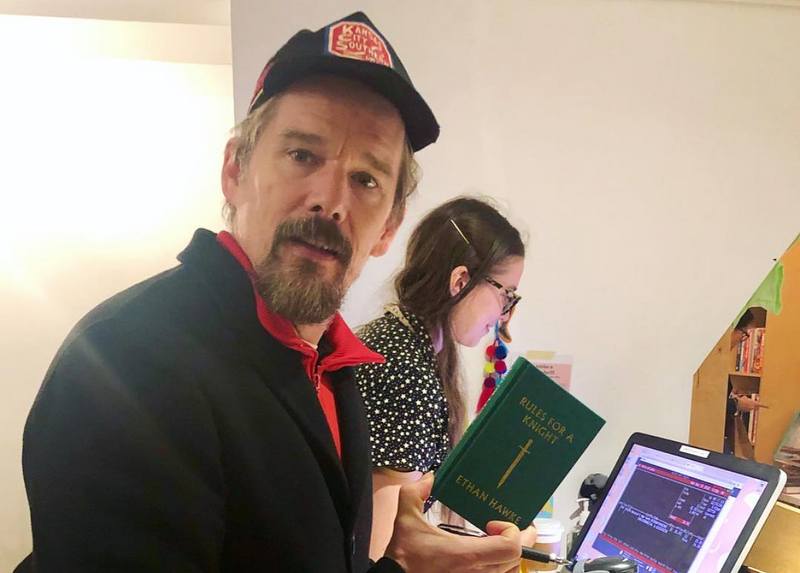 Ethan deals with acting, directing and writing. He espoused Uma on May 1, 1998 after getting acquainted on the set of Gattaca. Though the couple gave birth to two kids, they separated in 2003 before dissolving marriage in 2005. A curious fact: Hawke’s novel Ash Wednesday was dedicated to Uma’s middle name Karuna. In 2008, Ethan tied knots with Ryan Shawhughes, a former nanny of his kids with Thurman, and they have 2 daughters together. In one of his interviews, Hawke revealed that his personal life fell apart after divorcing Uma.

Andre is an hotelier and president of Andre Balazs Properties. He was romantically linked to Thurman in 2003-2007. In 2015, the rumors about their reunion emerged, but she assured that they were just friends.

Arpad is a financier, founder and chairman of EIM Group. In 1996-2005, he was in relationship with Australian model Elle Macpherson, a mother of his 2 sons. His affair with Kill Bill star began in 2007 and they got engaged in a year. In 2009, Arpad and Uma broke up but soon reconciled and welcomed a daughter. In 2014, their ways parted as, according to Thurman’s words, Arpad was very aggressive. 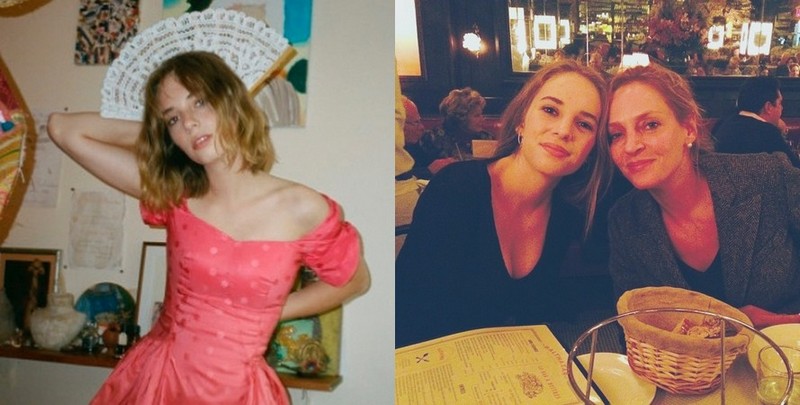 Maya followed in her mother’s footsteps and got involved into acting plus modeling. Though she suffers from dyslexia, she was the face of AllSaints’s 2016/2017 collection and took part in Calvin Klein’s video ad in 2017. Maya appeared in Little Women and Once Upon a Time in Hollywood movies as well as Stranger Things television series. 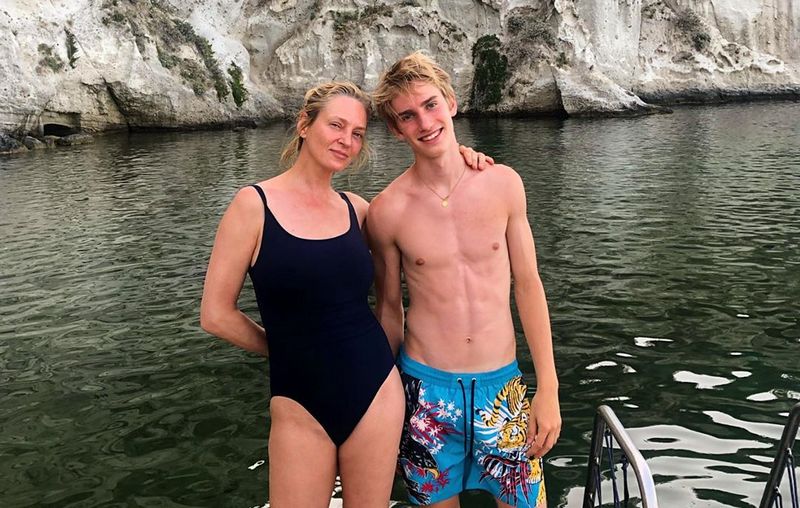 Levon made an acting debut in Blackout short film in 2018. He adores travelling with his mom and they often appear together at various public events. 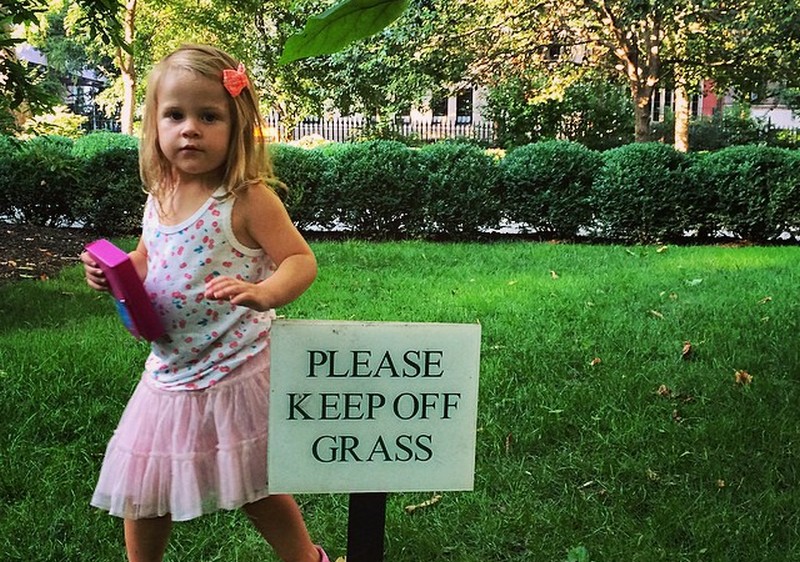 When her parents separated, they argued over the custody of Luna for about 2 years but Uma won. The girl is adored by her mom and elder siblings and her photos often appear on their social media.