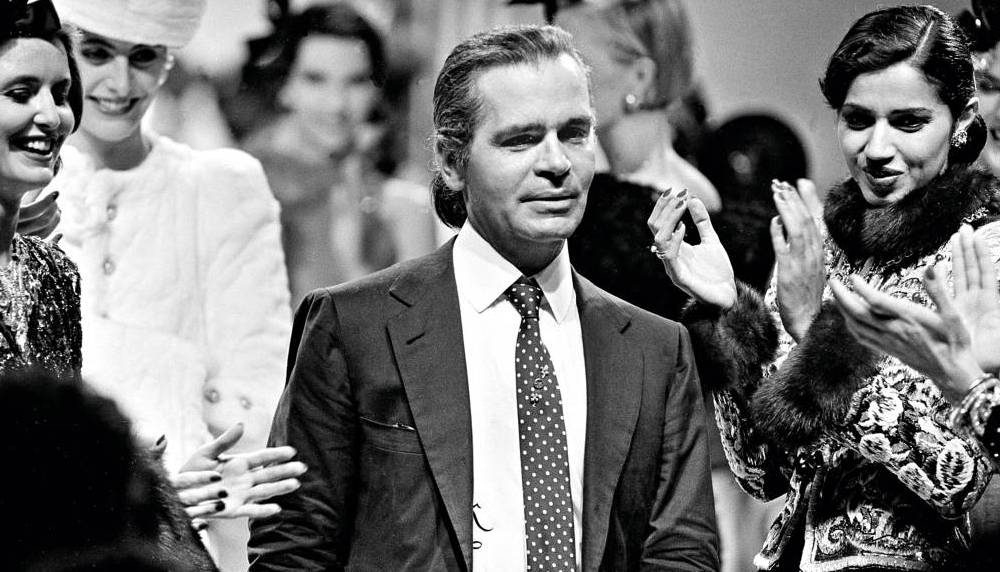 His collections are well-known all over the world; his runways are followers by crowds of fashion fans; his models are probably the best one may find around the globe. The destinations mean nothing if talking about Karl Lagerfeld as they are measured in cities – From London to New York, from Paris to Los Angeles…

This month is his Birthday, on the 10th of September, this fall is his new collection of clothes and – what a surprise rings – to be presented on the famous Parisian runway.

His first appearance was in 1983 at 31 Rue Cambon, when Karl used established previously by Coco Chanel codes and created a new Chanel uniform, which was soon added to the list “must-have”. Coco Chanel made some essential basis for his up-growing in career steps, making a loud entrance in the fashion industry with a ready-to-wear collection “A Faster Beat”. 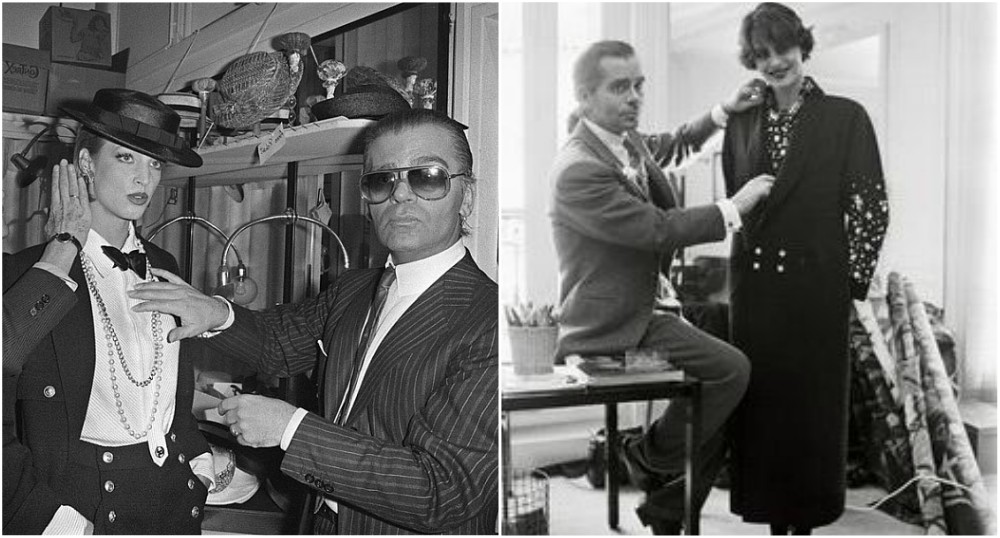 Soon after the collection was introduced to public, it was called by Suzy Monkes as “giving a whole new momentum to modern dressing”. So far it may be guessed the reviews from critics were generally positive.

Karl Lagerfeld, who was completely inexperienced that time having only the theoretical background, made a new start in fashion. It was connected mostly with his dreams and cool fresh ideas to be involved in the trends.

As someone mentioned about the work designer did, his vision was forward-thinking, while referring to the past. His vision was combined with what was previously, but easily transformed into what was common for that period.


So, here we are. You will be introduced the best collections ever created by Karl Lagerfeld. 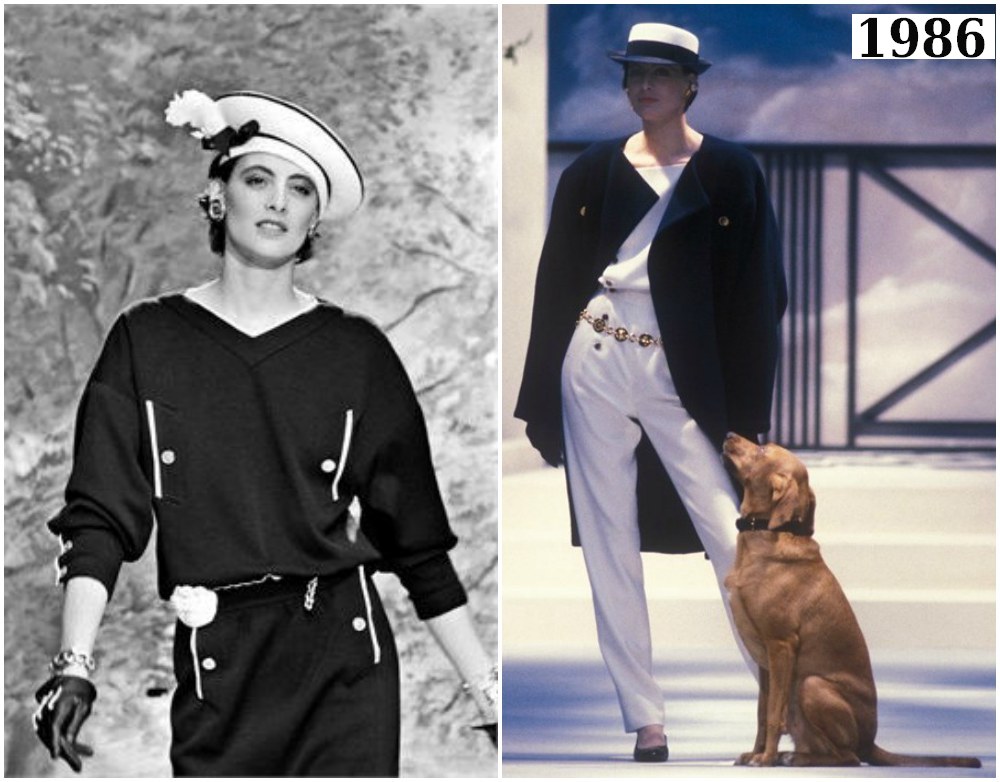 As even from the name the one may suppose the main colors to be used for the clothes items. For the up-side the jackets were chosen. Jacket suits together with long-length skirts became also trendy. In general the looks were elegant and stylish making the emphasis on the main detail, such as, for example, small hats. 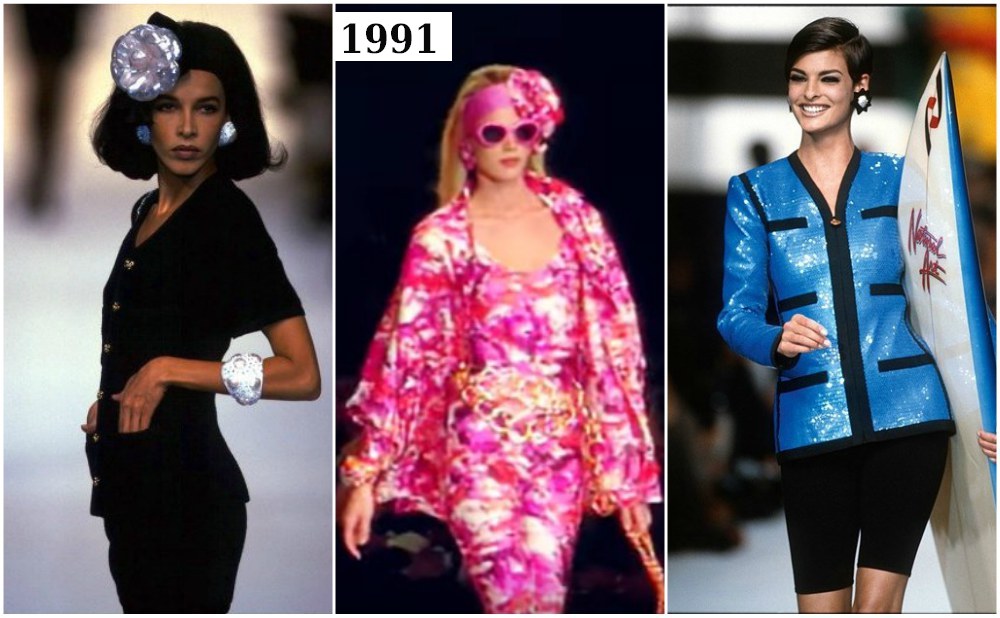 The big city life was rapid even twenty years ago, so far the looks to be made should have been suitable for any conditions and appropriate to the rush.

The popular elements were camellias, pearls and quilted bags.

The light colors were chosen for the down-side if the talk was about the trousers, so skin color was welcomed. The shorts became the item also, which got the dark colors.

Karl’s own comment to Vogue was: “…it’s perfect for diving into the nightlife from Paris to Rome to London to New York”. 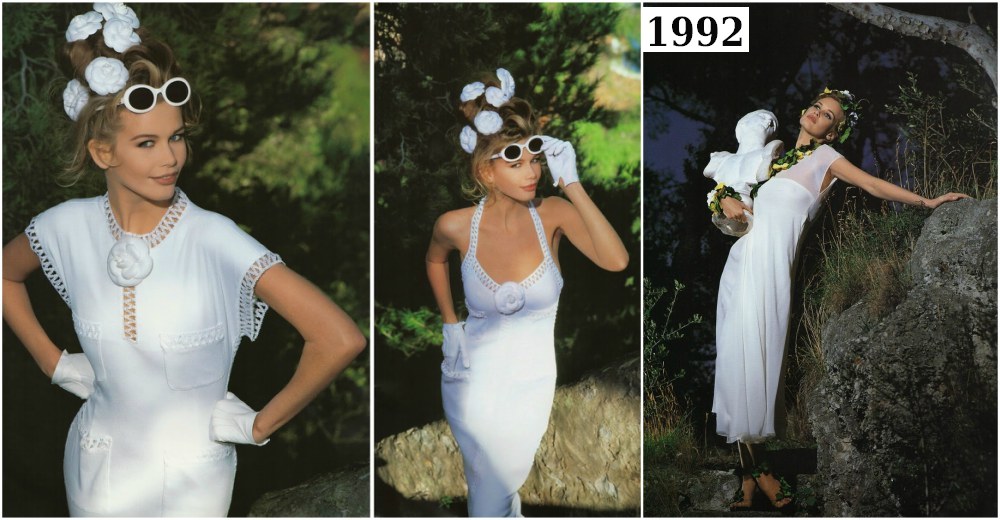 The designer chose nature as inspiration, so quilted bags and straw hats turned out to be very unique and trendy.

The main colors were white as usual and blue with its variations. The dresses were in majority stripped – what made them to look extremely cute.

What about the hairstyle – it was modest but elegant in the look of a bunch.

The main idea was to combine two opposite styles, which are similar in one point – freedom. The expressionism, which was common for the 1930s, suited perfectly the carefree mood of 1970s. 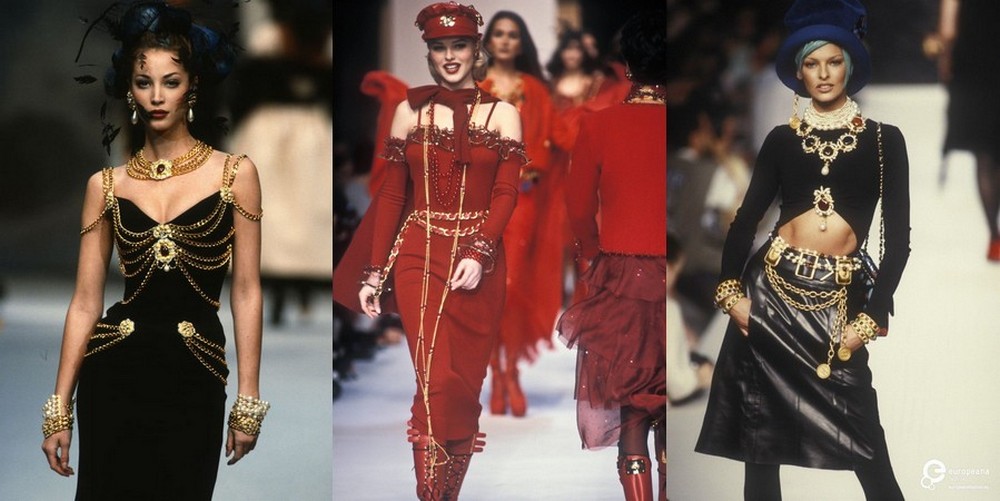 The colorful costumes with some embroidery and jewelry stones appeared carrying as much energy as possible.

What was extremely unique here – hand-painted hats different colors; and as one may guess the palette was wonderful.

As for the main material trend – it turned out to be velvet. 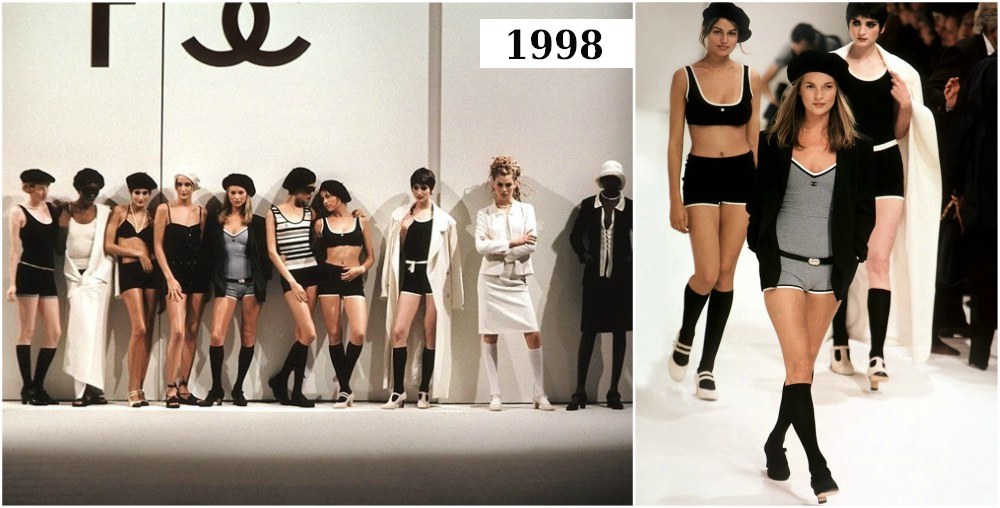 It was more likely not a collection, but celebration; it was a retrospective presentation, not a runway…

The show was divided into six parts, each of them was made according to a certain age with a limit of ten years.

The classic Chanel patterns were back in trend. For the example may stand skirt suits, curly cute dresses and light colors. What was also a pleasure – tweed to be back in trend.

The famous model of that time Kate Moss presented high-heeled shoes up to the knee, which made the emphasis on long legs, and a black beret.

Many celebrities found the appropriate dress for the open evening under the brand of Karl Lagerfeld. So far, it was decided to extend the collection with new elegant looks.

“Black is not sad, black is poetic” – because most of the dresses introduces to public were dark black colors; however that sadness was hidden among the light materials to be used, or their creative combinations. They are silk, lace, satin and velvet.

Jewelry in the look of necklaces became extremely trendy.

The show was conducted under the soundtrack written by legendary David Bowie, called “Fame”.

Being so much inspired by the fact London will hold the Olympic Games, the designer used the torches and the rings as the main idea of his collection.

Famous were the T-shirts in white color with Olympian gold torches.

This is the newest idea, the upcoming project by Karl Lagerfeld. It is going to be released in fall, so far now they are shown only on the official web-page.

The entitling name “Karl” is to be put on the downside of the ring.

All the rings are featured by diamond jewelry having the round or triangular shape.

If you are eager for any additional detail – they are still in wrapping. 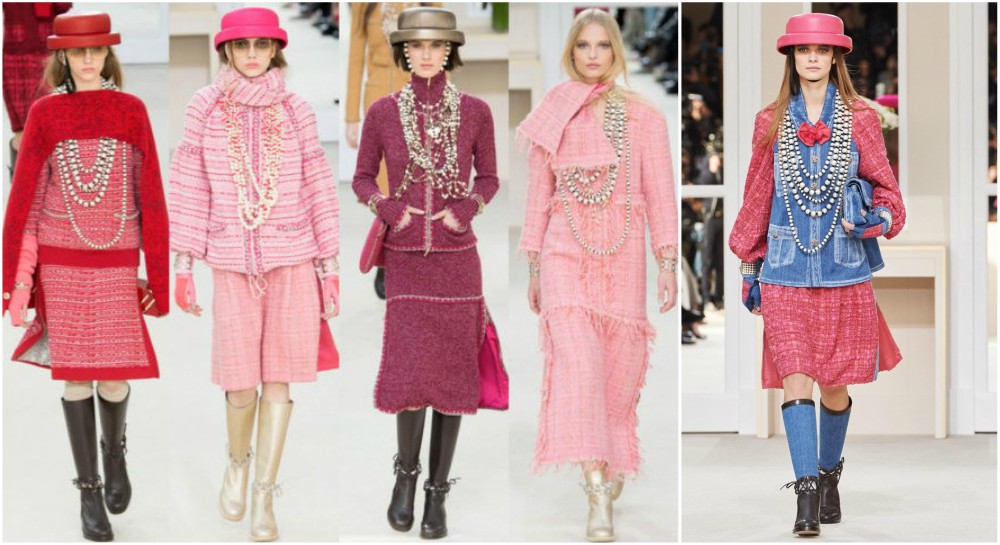 It is the latest clothes line to be presented on the French runway this autumn.

The teasers were made by the world-known models Hailey Baldwin and Joan Smalls on the background of amazing Parisian views.

What is popular this season – middle-length dresses with some lace included, tight jeans and short leather jackets to emphasize on the freedom and a kind of personal independence.

Some of the shirts are featured by a graphic design.

We are eager to get the latest information, any updates as because the brand is adored by so many people, that it shouldn’t be one more time mentioned about his popularity.

And here are some more photos of new Chanel`s trends 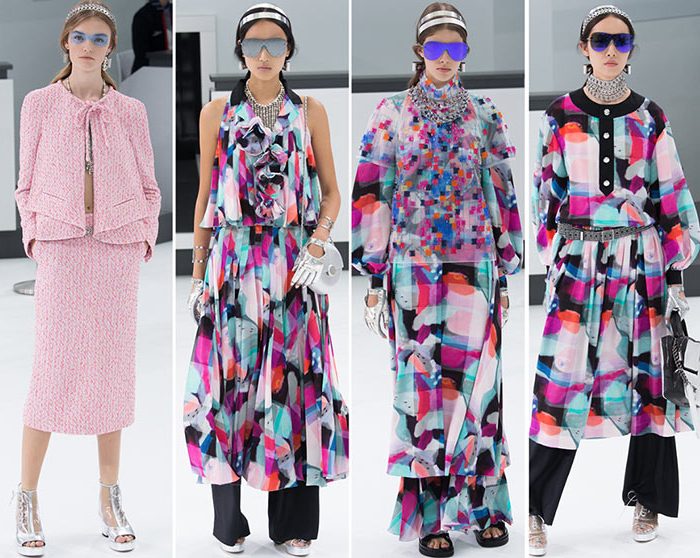 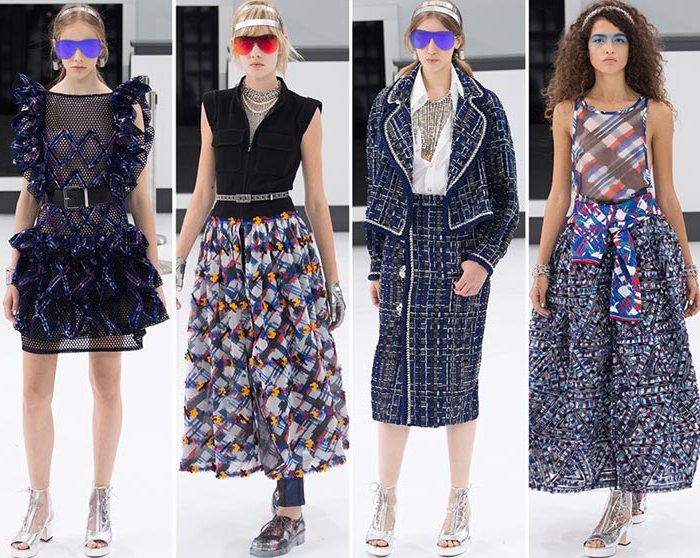 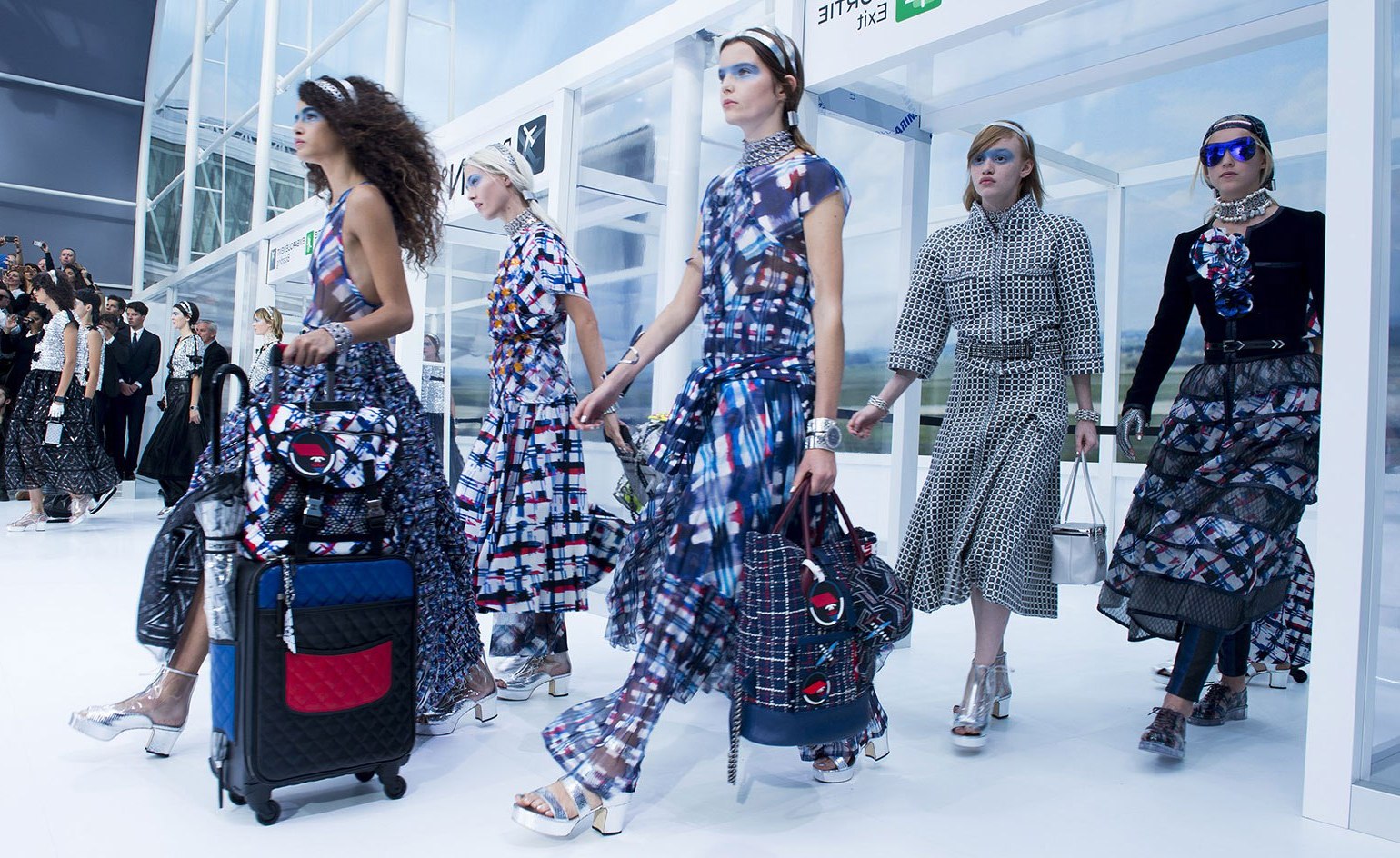